It’s recent college graduate Zach Greenfeld’s favorite time of the year and he’s just received a temporary gig planning Lighthouse Bay’s Christmas parade. Not only does it speak to his penchant for organization, it also puts him face to face on a daily basis with his unrequited crush—Holland Stone. But his new job starts off in disaster when the most important float—Santa’s sleigh—gets damaged.

Holland needs to win the Lighthouse Bay Christmas parade float competition in order to grow his new dollhouse-making business. The prize is an article in a major city newspaper, and nothing beats free advertising. Except, eager to help the adorable parade organizer, he volunteers to help fix Santa’s sleigh, leaving no time to work on his own float, and putting his prize at risk.

Damaged floats, snowstorms, and a last-minute parade emergency force Zach and Holland closer than ever. All they need is a little bit of Christmas magic to help them realize they belong together.

*Christmas Lane is a sweet, May/December, small-town Christmas romance with an HEA!*

Patisserie Chef Christopher Miller works for Big Boy Cupcakes, London’s only gay bakery. His boss had closed the bakery on the 23rd of December, and Chris was looking forward to some well needed time off, and Christmas ALONE. But then his boss calls him with a last minute order—the order of his dreams—to bake for his movie idol, actor Jason Beck.

Just as he is about to deliver the order, Chris’s dreams are turned upside down by an explosive, fateful meeting with Fred, an errant Chocolate Labrador. The dog’s owner turns out to be Robin Summers, a one night stand from months before…the man that Chris could not forget..

Company for Christmas: A Festive Cinderfella Story by A E Ryecart

Who says fairy tales are only make-believe?

Every night, Nathan works the street known as The Rack. Like every other rent boy, he dreams his Prince Charming will come and take him away to a better life.

Max has everything except the one thing he craves: somebody to love, cherish, and protect.

Somebody to call his own.

When Nathan and Max’s worlds collide on the cold and grimy backstreet, little do they know that Christmas magic has already cast its spell.

Maybe fairy tales really can come true after all. 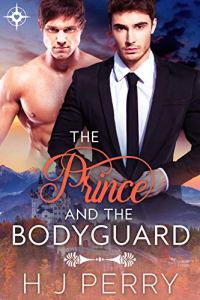 The Prince and the Bodyguard by H J Perry

“I like my men available now and gone in the morning.”

Currently in personal security, Oscar sees his future as forever closeted and single. His lovelife can never be more than a series of hookups with men who want the same. No repercussions and no emotional involvement. Definitely not a client. But it’s lust at first sight when he meets the ultimate temptation, HRH Prince Tobias.

Oscar was supposed to be guarding that body not getting to know it better. Intimately. For a week.

“Seducing the bodyguard was easy. Moving on and forgetting about him was impossible.”

Toby can’t stop thinking about his first time with a man. The instant attraction between him and the gorgeous bodyguard was impossible to ignore. With his anything’s-possible attitude, Toby can only see why they should be dating.

In this sizzling high-heat romance two men reassess what they want in their futures. Among other things this high-heat, low- angst book features:
* Two men in their thirties.
* A bisexual prince charming.
* A temporary secret boyfriends arrangement.
* The International Year for Indigenous Languages.
* A Cornish pasty.
* A very romantic happy ever after.
Approx 50,000 words.

Standalone novel, there is no cliffhanger, no cheating, and there is a happy ending. 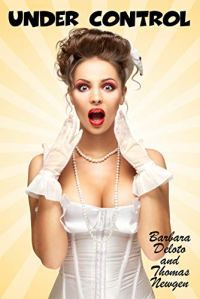 A male who is feminized and redesigned to serve men?

Bored with his life, Alex looks for a new job and finds the opportunity of a lifetime in an advertisement that promises a purposeful life, fulfilling the needs of others and never wanting for anything. “You’ll be passionately motivated to achieve what you’ll be designed for and may even find the love of your life. Everything in your life will be under control. Set up an appointment to change your life now.”

Little did Alex know what would happen to him or what he’d be designed for when he signed the papers. He is almost completely feminized, with an enhanced nervous system and a remote control for others to use to control the newly feminized male in order to serve men. Unfortunately, her memories of who she was before weren’t wiped out as they were supposed to be, and yet her programming to serve men took hold.

What will she do? If she’s found to be imperfectly programmed, she’ll be terminated. Her previous male self was straight, and now she can’t be. Will the advertisement ever become true for her? Will she be motivated, find love, and be under control by others, or will she end up in control and happy?

Enter the world of a crossdressed and feminized male and see if there is any chance for the new ‘gurl’ in this short-read, new adult, LGBT, hot and steamy, transgender romance. Look inside now.

What could be better than waking up next to a hot guy? Waking up sandwiched between two of them.

Quinn Preston, a financial analyst, is not happy when her friends dare her to pick up a handsome stranger at a wedding reception. What better reason to give up men when her previous long-term relationship had not only been lackluster in the bedroom but he had cheated?

Logan Reed, a successful business owner, can’t believe that he’s attracted to the woman in the ugly, Pepto-Bismol pink bridesmaid dress. And to boot, she’s more than tipsy. After turning down her invitation for a one-night stand, he finds her in the parking lot too impaired to drive. He rescues her and takes her home. His home.

The next morning Quinn’s conservative life turns on its ear when Logan introduces her to pleasures she never even considered before. And to make things more complicated, Logan already has a lover.

Tyson White, ex-pro football player, is completely in love with Logan. He has mixed emotions when Logan brings home Quinn. But the dares keep coming…

Note: This book in the series can be read as stand-alone. It includes an HEA ending. It is intended for audiences over 18 years of age since it includes scenes between all three characters – MMF.

Tyler and Jason (Bound in Silk Book 1) by Chris McHart

Dominating your new employee might be the worst idea ever… or the best.

Broke and without a job, Tyler has been sleeping in his car. When he’s offered a job at Bound in Silk, it might just be the change in luck he needs. What he doesn’t expect is for the club owner to be so hot and dominant. He ticks about every of Tyler’s boxes – even though a relationship is the last thing Tyler needs right now.

If you like hot, sizzling romance spiced with a healthy dose of submission, then Chris McHart’s new series Bound in Silk is for you. Come on and join her in the wonderful world of kink.

(*This book was previously published under a different pen name.*)

All I Want Is You: A gay holiday romance by DJ Jamison

One kiss under the mistletoe destroyed a friendship. Will another Christmas kiss remake it into something better?

Eli hasn’t been home since he left at eighteen with a heart aching from his best friend’s rejection and his father’s intolerance. But when his father reaches out, Eli figures it’s time to make peace with his family. He doesn’t expect to come face-to-face with Turner too — or to learn that the straight friend he’d foolishly loved is actually bisexual — but once the shock wears off, he knows exactly what he wants for Christmas.

Turner’s life isn’t everything he’d once planned, but he’s happy to be the shoulder his loved ones lean on. They keep him busy, which is just as well since none of his dates have really clicked. He hasn’t been able to connect with anyone the way he did with his former best friend. When Eli shows up for the holidays after years away, Turner doesn’t know what hit him. But he knows one thing: This time, he wants to give Eli a reason to stay.

All I Want Is You is a friends to lovers, second-chance romance with an HEA.

From KU Fun for November & December! Check out more here.

Attraction for Adam was not a handsome face, a striking smile, or beautiful eyes, but a scent that would drive him to distraction or a voice that could make his heart beat faster. When the combination of the two walked into his life in Luke, Adam couldn’t help but want him. But how was he supposed to know if Luke felt the same attraction? He had no prior experience, no past encounters, nothing to help him. Not even his sight.

One look at Adam and Luke wanted him. Sensual, gorgeous, kind, with a strength that Luke was drawn to, Adam was everything Luke desired. Being in Adam’s arms, showing him the pleasure of a man’s body, being touched, held, and desired in return, had Luke wanting more, had him wanting what he knew he couldn’t have.

It didn’t matter to him that Adam was blind, but Adam deserved more than someone like him. Luke was a man with a broken past and falling in love with Adam was a foolish thing to do, especially because Adam would never love him back if he found out what Luke was hiding.

This is a stand-alone M/M romance with a HEA and no cliffhangers.

Summer of Sonny by I.M. Flippy

Jay Lauer is content with his life. He’s happy working for his dad at Blue Pine Lake Camp up in the San Bernardino Mountains where he fixes everything that needs fixing, handles logistics, and in his spare time makes stunning works of art at his beloved pottery wheel. He doesn’t need a change or a reason to leave the mountain where he’s comfortable. He certainly doesn’t need a handsome geophysicist from MIT who talks too much to upend everything he thought he wanted. On the bright side, Sonny seems kinda patronizing and dismissive of Jay. So Jay’s in no danger of falling in love…right?

Dr. Sonny Jacobsen has just gained his doctorate in geophysics from MIT. On a whim he decides to teach kids science lessons at Blue Pine for the summer, a well deserved break after a long and intense academic career. He doesn’t expect there to be a gorgeous handyman distracting him. But Jay hardly seems like the academic type, he can barely hold a conversation. So Sonny’s in no danger of falling in love…right?

It’s just as well that Jay and Sonny get the wrong impression of each other. Falling in love would only complicate an otherwise serene summer and they’re in no danger of that…right? 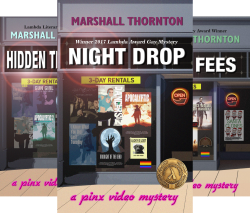 From Book 1: It’s 1992 and Los Angeles is burning. Noah Valentine, the owner of Pinx Video in Silver Lake, notices the fires have taken their toll on fellow shopkeeper Guy Peterson’s camera shop. After the riots end, he decides to stop by Guy’s apartment to pick up his overdue videos, only to find Guy’s family dividing up his belongings. He died in the camera store fire—or did he? Noah and his downstairs neighbors begin to suspect something else might have happened to Guy Peterson. Something truly sinister.

The first in a new series from Lambda Award-winner Marshall Thornton, Night Drop strikes a lighter tone than the Boystown Mysteries, while bringing Silver Lake of the early 1990s to life.

EBOOK SPOTLIGHT: Out of the Frying Pan (Love in Flames Book 1) by Elouise East