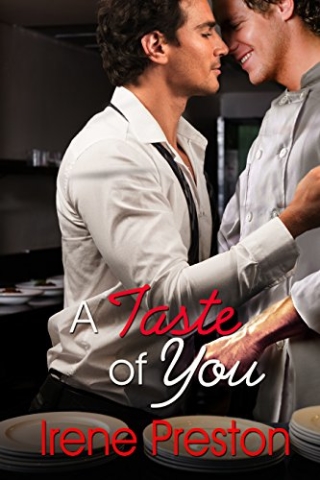 A Taste of You by Irene Preston

Garrett Ransom is America’s hot chef du jour. He has a Michelin-starred restaurant in New York City, a hit reality TV show, and a new man in his bed every week. Yes, he secretly thinks his business partner, Giancarlo “Carlo” Rotolo, is hotter than a ghost pepper, but he would never jeopardize their friendship with a fling. Then Garrett overhears some juicy gossip among the crew and realizes he’ll have to break Giancarlo’s cardinal rule, no banging the staff – for Carlo’s own good, of course. Just a taste of Carlo should be plenty. Long-term relationships aren’t on Garrett’s menu.

Giancarlo’s been in love with Garrett forever. He’s sure Garrett will eventually realize they are destined to be more than business partners. But when Garrett installs his latest boyfriend as their new chef d’cuisine and announces plans to leave Carlo in New York while he opens a second restaurant on the west coast, Carlo is forced to re-evaluate his life.

Can a high-strung British chef and a nice Italian boy from Brooklyn find the perfect fusion of fine-dining and family-style?

This title has been previously published. The publisher has changed. There are no additions or significant changes to the text. 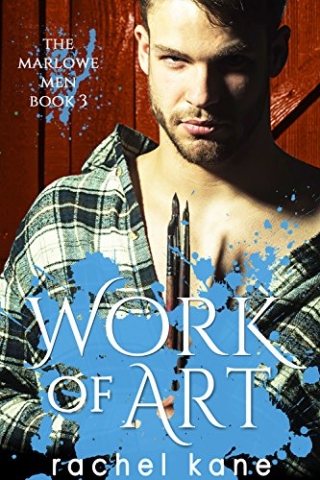 Work of Art by Rachel Kane

He’s about to fall for the wrong man…Private eye Derek Marlowe wishes he’d never agreed to hunt down this stolen painting for a wealthy client. He can’t tell a Van Gogh from a Picasso. Fortunately, he finds art historian (and sometimes nude model) Theo Stanton, who’s the expert he needs. Unfortunately, from the second they meet, Derek finds himself hopelessly attracted to the younger man.
Theo is frightened. The truth is, he’s the thief who stole the painting, and he has plans to steal another. The last thing he needs now is to get close to the detective who is hunting him down. And yet he can’t get Derek out of his mind. As they work together, he realizes how much of an emotional connection is growing between them…a connection that could be destroyed if Derek ever found out the truth.
Derek knows he shouldn’t say anything about his feelings. He knows Theo is too cultured, too hot, and too young for him. But if he doesn’t take the chance and tell Theo how he feels, he might never get another chance.
Torn by trust issues in their pasts, can Derek and Theo’s budding relationship survive the deep secret that lurks between them?

Work of Art is a steamy May-December gay romance with hurt/comfort themes.

“If you can’t remember it, was it ever real at all?”
“How do I fall out of love?”
Cash Bennett enlisted in the Marines the day his boyfriend married someone else, but military life failed to numb the pain. After he got out, he relied on casual sex and the adrenaline rush of pushing his limits to distract himself from the inescapable truth: He’d lost his heart the first time he laid eyes on Robbie Logan, and he’s never going to get it back.
“I want a divorce.”
An accident on Robin Logan’s eighteenth birthday changed his life. He lost his memory but gained a best friend, a woman whose dreams were stolen when their lives collided. At the urging of his homophobic father, Robin married her out of guilt. But now he’s free… and not at all sure he’s got the courage to go after what he’s never admitted to wanting. Or whether he even deserves it.
“I love you. I don’t know how to do anything else.”
Robin doesn’t remember what they once were to each other, and Cash can’t forget the way they’d been. Sometimes, though, life gives you a second chance to do it all over again…

Again is a steamy, standalone gay romance novel with a HEA and no cliffhangers. 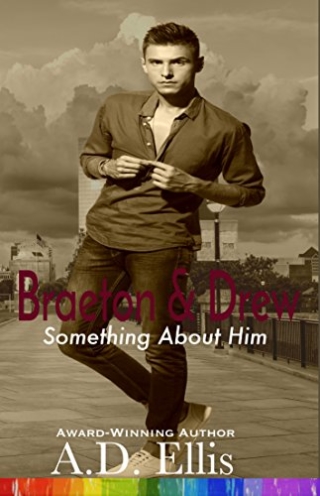 Braeton & Drew: Something About Him by A.D. Ellis

Braeton Reed left his small-minded hometown and disapproving family long ago and never looked back.
Andrew Hines has nothing against a solid, loving relationship; he just isn’t sure he’ll ever find one.
Braeton has been told he’s a bit of a diva. Andrew has heard he’s not flashy enough. Can their differences pull them together? Or will these polar opposites allow society to dictate who they are and who they love?

**This is a male/male romance meant for ages 18+ due to adult language and adult situations.** 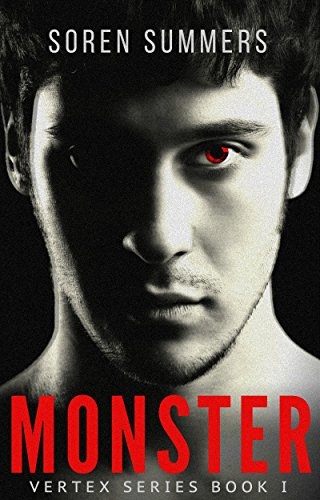 Bloodied corridors. Mangled bodies. Deranged test subjects. Just another day at Vertex, a corporation devoted to perfecting humanity by any means necessary. It’s up to Jarod Samuels to keep the hallways pristine and safe, but scrubbing bloodstains and bagging bodies is losing its luster.
Then someone new joins his department, this man with a huge ego and an even huger mouth. Gabriel Anderson is infuriating but intriguing, as brash as he is beautiful, and almost enough to keep Jarod preoccupied. Almost.
But between workplace hazards, psychic sociopaths, and a mysterious formula that alters the human body, Jarod’s doubts are surging. Should he stay with the corporation, or run like hell? This is Vertex, after all, where the walls watch with glass eyes, the laboratories groan with secrets – and employee termination ends more than just careers.

This romantic horror story is approximately 88,000 words in length. 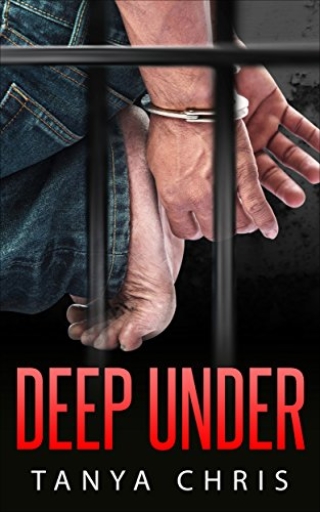 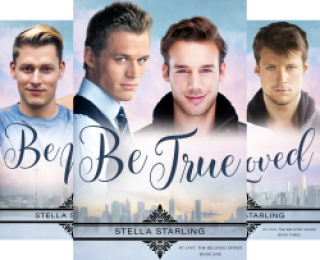 Outspoken, outgoing, and outrageously out, Trevor Rogers isn’t one to say no when opportunity comes knocking. And jetting off to New York City to play the part of reclusive billionaire Logan Carter’s boyfriend for a Valentine’s Day publicity campaign? That’s not just a yes, but oh hell yes.

When Logan Carter’s business partner, the founder of the popular dating app bLoved, starts receiving death threats and has to stay out of the public eye, Logan is thrust into the limelight. The only problem? Logan doesn’t do public. He also learned the hard way never to mix business with pleasure… no matter how tempting someone like Trevor might make it.

Trevor doesn’t want to be tied down, and Logan isn’t interested in opening up… but if falling in love is all just an act, why does saying “I love you” start to feel so real?

Be True is a gay romance novel of approximately 93,000 words that contains a bossy billionaire, a failed attempt at an utterly impossible sex position, and two men who are destined to discover that the love neither wanted is exactly what each of them needs. It has a Happily Ever After ending, no pesky cliffhangers, and can be read as a standalone… but if you enjoy Trevor and Logan’s story, be sure to keep an eye out for the other two books in the series! Enjoy! 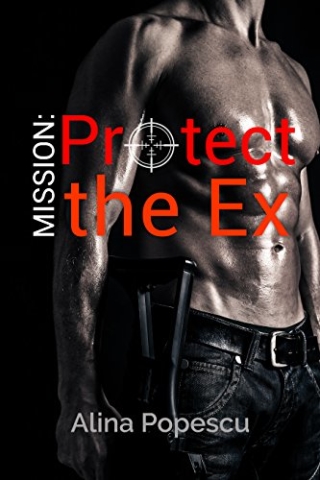 Sean never thought his military career would ever have him babysitting his ex who Sean hasn’t seen in six months.
When best friend Tom finds out his younger brother Aiden is targeted, Sean drops everything to protect the man he still loves.
Can two former lovers survive a weekend alone in the woods, or will the threat from within be more devastating than the one from outside?
Word count: ~8000 words 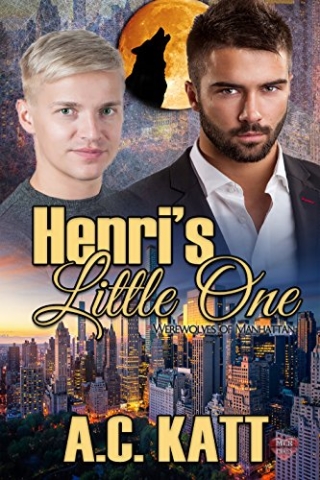 Henri’s Little One by AC Katt

Alpha Henri Giraud has finally found his Mate; but Vitas Kosloff comes with a host of problems not the least of which he carries a great gift and the Russian First, Fydor Chernof, claims Vitas is his.
After much hardship, Vitas Kosloff finds his Mate, Henri Giraud, Director of Security for the North American Council and Garou Industries. Vitas, held captive by Fydor Chernof, the Russian First, who claims Vitas belongs to him He escapes Chernof’s torture with the aid of Chernof’s two Betas, Anatoly and Maxim.

Vitas is a full loup garou who carries a huge mating gift, he can tell the truth from lies and dream the future. Because of this Chernof will stop at nothing to re-capture him, even after Henri mates and marries Vitas. With the aid of the other Mates, the North American Council and Frank Ferone, Vitas and Henri attempt to outwit Chernof and take care of the Russian problem for good. 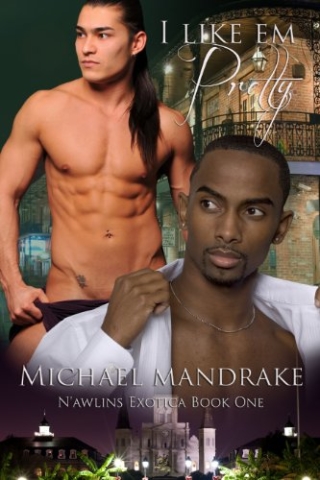 New Orleans is supposed to be the big easy. One night changes everything for Frankie Choteau.
New Orleans. A city rich in tradition, diversity, and on the comeback trail from hurricane Katrina. Francois “Frankie” Choteau, a resident of this town, a cop with a hot temper and low tolerance for bs. Kajika Fortier, a transplant from Oklahoma came here looking for a dream and unfortunately it’s turned into a nightmare. On a hot summer night, they meet and cross paths during a very difficult situation. Despite this, the attraction between them is evident and loneliness for both men is a fate worse than death. They’d both like a chance at happiness but will the circumstances and Frankie’s uneasiness prevent their happy ever after? 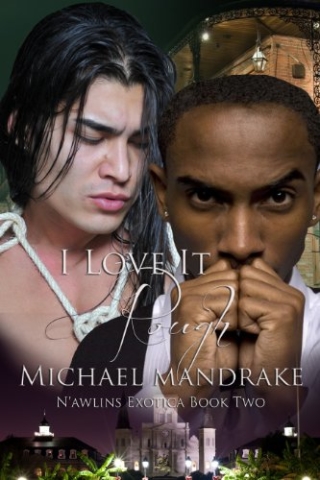 Livin’ in N’awlins ain’t all that easy…
Kajika Fortier loves his job, the attention he gets from onlookers, and Frankie Choteau. However, his new partner’s jealousy, mood swings, and over protectiveness drives Kajika to the brink but at the same time, excites him to no end.
To complicate things further, a murderer is on the loose looking for blood. All three of the killer’s victims are strippers which not only makes Frankie nervous about Kajika’s safety but leaves him questioning his love for being a homicide detective. Coupled with the stresses of cold cases as well as some fellow officers shunning him for coming out, Frankie is having second thoughts about staying in New Orleans. Despite the encouragement from Vance, Kenina, and Orrin as well as new chief Quinn Murray, Frankie is wondering if his life’s passion really is to catch the killers.
Will the new couple survive these new issues that impede their nearly perfect union? Or will the relationship fail, thus leaving Kajika alone and a target for New Orleans latest serial killer? Detective Choteau and Kajika’s commitment to one another is being tested in more ways than one and they only have one another to lean on.
This is book 2 of N’awlins Exotica. Books must be read in order.

Check out the series with the first two books for only 0.99 each! (see posts above this one!)

New Orleans is supposed to be the big easy. One night changes everything for Frankie Choteau.
New Orleans. A city rich in tradition, diversity, and on the comeback trail from hurricane Katrina. Francois “Frankie” Choteau, a resident of this town, a cop with a hot temper and low tolerance for bs. Kajika Fortier, a transplant from Oklahoma came here looking for a dream and unfortunately it’s turned into a nightmare. On a hot summer night, they meet and cross paths during a very difficult situation. Despite this, the attraction between them is evident and loneliness for both men is a fate worse than death. They’d both like a chance at happiness but will the circumstances and Frankie’s uneasiness prevent their happy ever after?