Chris Dobbs is used to getting what he wants. What he wants now is his boss. Everything about the dangerously handsome enigmatic older man drives him to his knees in more ways than one, ways Chris is realizing he’s always craved.

Giving Jay-Cee his body is as simple as breathing, but when Chris smashes through all of Jay-Cee’s hard earned control, he learns Jay-Cee demands more than just his obedience. He wants things Chris can’t give him – his heart, his soul, and his trust.

Jay-Cee offered his brilliant young protégé everything. In return, Chris took only the pieces he wanted and rejected the rest, leaving Jay-Cee reeling. But the deep connection between them isn’t easily severed, and it promises to heal them both of the scars of their pasts.

If they are to build a sanctuary from the rubble of their broken hearts, they’re going to have to risk everything. 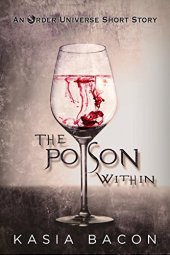 The Poison Within by Kasia Bacon

Black clouds of xenophobia gather over Radvadur, the western province of the Empire. The political climate is strained and fragile. A surge of Nymph refugees has stirred widespread hostility towards non-humans. When the investigation of a gruesome triple murder linked to the refugee camp ensues, it takes Inspector Käyru Skaer and his lover, Count Ellydhar Finn-Jánn, along an unusual path, at the end of which a precious gift awaits.

Käyru and Elly are worlds apart in social standing, but they have found common ground in the bedroom—up against the wall and the stable doors, too. The arrangement between them ought to have been temporary and of no consequence. As their circumstances change, will they find the courage to risk their hearts?

Be True by Stella Starling

$ 0.99 in US and UK (Note: at the time of this email, the books weren’t discounted yet, please check the price BEFORE ordering!)

Outspoken, outgoing, and outrageously out, Trevor Rogers isn’t one to say no when opportunity comes knocking. And jetting off to New York City to play the part of reclusive billionaire Logan Carter’s boyfriend for a Valentine’s Day publicity campaign? That’s not just a yes, but oh hell yes.

When Logan Carter’s business partner, the founder of the popular dating app bLoved, starts receiving death threats and has to stay out of the public eye, Logan is thrust into the limelight. The only problem? Logan doesn’t do public. He also learned the hard way never to mix business with pleasure… no matter how tempting someone like Trevor might make it.

Trevor doesn’t want to be tied down, and Logan isn’t interested in opening up… but if falling in love is all just an act, why does saying “I love you” start to feel so real?

Be True is a gay romance novel of approximately 93,000 words that contains a bossy billionaire, a failed attempt at an utterly impossible sex position, and two men who are destined to discover that the love neither wanted is exactly what each of them needs. It has a Happily Ever After ending, no pesky cliffhangers, and can be read as a standalone… but if you enjoy Trevor and Logan’s story, be sure to keep an eye out for the other two books in the series! Enjoy! 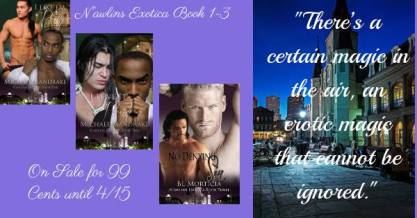 If you don’t buy at Amazon, here are links to other retailers: https://books2read.com/u/me0aKR

New Orleans. A city rich in tradition, diversity, and on the comeback trail from hurricane Katrina. Francois “Frankie” Choteau, a resident of this town, a cop with a hot temper and low tolerance for bs. Kajika Fortier, a transplant from Oklahoma came here looking for a dream and unfortunately it’s turned into a nightmare. On a hot summer night, they meet and cross paths during a very difficult situation. Despite this, the attraction between them is evident and loneliness for both men is a fate worse than death. They’d both like a chance at happiness but will the circumstances and Frankie’s uneasiness prevent their happy ever after?

How long can you wait on a promise?

After his first night with Mal, Rick broke the habit of a lifetime and invited the sexy radiographer to spend the weekend in the sleepy English village he called home. Rick isn’t in denial but he’s afraid to reveal his sexuality in the close-knit community that has known him since he was a babe in arms.

The sex is amazing but equally Mal loves lazy days spent in the garden at Slopy Bottom, and every precious moment he spends with Rick. For Mal the village quickly becomes an oasis of peace, far from the noise and grime of life in London, a slice of tranquillity with Rick at the heart. But Mal has defied his family and his religion to be true to himself, and there is no way can he join Rick in his self-built closet, no matter how comfortable it is…

Rick is afraid revealing the true nature of his relationship with Mal will change the way his neighbours see him. He adores these people, this village, and he can’t face the thought of losing everything over who he chooses to sleep with. When the alternative is giving up a man who has slotted perfectly into his life—a man who he might just love—it’s no choice at all. But, knowing what has to be done isn’t always as easy as putting it into practice.

Free on Amazon (Note: This book wasn’t free yet  at time of this email. Please check the price before buying!)

Resonance: The quality in a sound. The power to evoke enduring emotions. Sometimes one can result in the other.

Rick Brandt would never have said he was claustrophobic; after all he’s been in plenty of enclosed spaces in his job as the village’s only handyman cum gardener. He even squeezed into a disused coal chute to rescue a trapped dog for an elderly resident. So why did opening his eyes in the MRI scanner induce a breath stealing freak-out that has him jabbing at the panic button.
Luckily, Mal, the radiographer running his scan has a pleasant voice and an excellent bedside manner that soothes Rick’s frayed nerves and rabbity heartbeat. Soon the resonance of his tone has gone beyond calming and Rick is lost in a fantasy of the man behind the voice. But things aren’t always what they seem and when Rick’s shocked surprise at the reality causes offence, the likelihood of him getting to experience Mal’s true bedside manner appears to be slipping away.