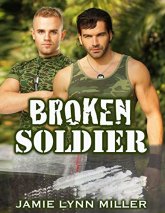 Partners in the field and out, they had been through hell together for the last four years and made it through standing side by side. But when their latest undercover op to bring down an arms dealer plunges them into a world of drugs, sex and violence, Shawn must literally get in bed with the enemy in order to complete the mission. And Connor is forced to watch, helpless, as his partner is broken into pieces.

Will love be enough to put them both back together or will this be their final mission?

Shadow Unit may have overturned the illegal arms cartel in Kuala Lumpur, but the harrowing undercover op left emotional scars on Sergeants Shawn Weller and Connor Finley. Slowly, patiently, they piece their partnership back together, closer now than ever before.

Until a new mission threatens to tear them apart.

When Connor accidentally kills a civilian, he questions his job, his abilities, his worth. A timely offer of promotion seems his only way out, even though it means transferring out of Shadow Unit and away from Shawn.

The arrival of Julian Montgomery, Shawn’s former CIA handler and lover, further strains their relationship. Julian knows all of Shawn’s secrets as well as the past Shawn has kept hidden from Connor. Now the self-serving Julian wants Shawn back–with the CIA and with him. No one will get in his way. Including Connor.

When the joint Shadow Unit/CIA mission to stop the supplier of a deadly biological weapon goes sideways, Connor is captured, tortured, and used as a human test subject. It’s a race against time to save his life. But who can Shawn trust?

And who has gone rogue?

Cherished by Two by Morticia Knight

Destiny rewards those who embrace it.

Chris and his alien soul matches, Lasar and Nary, are ready to deepen their new bond as mates. It’s also time for Chris to begin his training as a Nasha, or sub, and for Nary to embrace his new role as Ahna, or Dom, to Chris. As three in the soul match, they are unique. Not only have Alasharians never matched with a human, they’ve never matched as three.

What makes them special also puts them in danger. The Supreme Soul Healer warned Chris that many changes were ahead, ones even more startling than the original invasion. They must keep their bond a secret until they know who they can trust.

As Ahna to both Nary and Chris, Lasar carries the responsibility of protecting his mates. A proud Alasharian warrior and commander, he’ll stop at nothing to keep them safe and to help Chris find his missing mother and sisters. To make sure that Chris’ cousin Morgan isn’t sent back to the slave cages, he’s also arranged for a fellow commander to take Morgan into his care when he returns from battle.

Lasar and Nary are invited to a pleasure party by the Alasharian’s leader, the Nall, and are forced to bring Chris and Morgan. But a terrifying turn of events sets in motion what might be the beginning of the end for them all, unless they can resist the void.

Smudge really needs to get laid, if only to stop himself wondering about the softness of Raleigh’s curls and why he keeps running away.

After his tumultuous teenage years, Smudge has settled into his quiet life in the sleepy English village of Slopy Bottom. He’s his own boss with the time and space to indulge his artistic creativity. And he has friends. He’s happy. Satisfied. Lonely. And the pool of potential soulmates is almost non-existent. His friends, Rick and Mal, flush with their own happy romance, keep trying to set him up with the most incompatible men, and he’s never finding true love on Grindr. Hell, he’s not even going to manage a hook up based on the kinky messages he’s been getting recently. He’ll just have to slake his desire to find his own HEA in the pages of bosom-heaving romance novels.

Raleigh is the darling of Slopy Bottom’s blue rinse brigade: church organist, mobile librarian, and apparently wedded to his trademark cardigans. He seems to be the polar opposite of the artistic Smudge, whose brightly coloured mohawk and piercings should be a red flag to Raleigh. Yet he’s yearning for company too. It’s just that Raleigh has less expectation and definitely less courage to chase after it, for reasons that he keeps very close to his chest. Reasons that don’t stop him from being drawn irresistibly to Smudge.

Smudge is sure that the way Raleigh runs from him whenever he sees him is cruelly deliberate. A reflection on his bad boy looks and his disdain for Raleigh’s precious church. So why can’t he stop thinking about the softness of Raleigh’s curls and his delicate body? Then Raleigh offers an olive branch of sugar and caffeine, Smudge’s favourite combination, starting them on a road to an awkward truce. And when they are conned into working together on a community project at the local hospital, the proximity ignites a spark that can’t be ignored. But navigating the murky waters that could take their relationship beyond tentative friendship all depends on whether Raleigh can release his secret fears – and whether Smudge is the man to share and allay them.

Macho, a May-December romance between two men, and how it’s never too late to grow. Jared is an insecure young man from an abusive home taking his first steps toward becoming a stronger man. Surviving an abusive family-life has given him strengths he knows nothing about, until they are revealed to him by the man he falls for. Creed is the muscular, insanely hot owner of Macho, a gym for hardcore fitness fanatics. Attracted to his latest client, he’s wary of the age difference between them, and a secret that could derail any hope for a relationship. Looks are easy to worship, it’s when you are forced to dig beneath the surface that true love becomes a permanent part of your soul. This is a stand-alone novella without cliffhangers and it comes complete with hot and steamy sexy times and a HEA. For mature audiences over 18. Trigger warning; this story addresses themes of emotional, physical, and sexual abuse.

The Return of The Earl by Sandra Schwab

CAN THEY OVERCOME THE BETRAYALS OF THE PAST FOR A SECOND CHANCE AT LOVE?

On the Continent they call him the Ice Prince, icy of manner, icy of heart. Now, after thirteen years of exile, Con returns home to England and to Harrowcot Hall, a place haunted by memories of a long-lost friendship and past betrayals, a place where all of his dreams shattered and died.

But the past is over and done with, and can no longer touch him — or so Con thinks. He certainly does not expect to come face to face with Bryn Ellison again, the man whom he once loved beyond everything and who repudiated their bond in the cruelest way imaginable.

As snow and frost close in on Harrowcot Hall, Con’s icy demeanour starts to melt while he grapples with old hurts and newly awakened passions. Will he give in to the lure of the past against his better judgement?

WARNING:
This book contains a very grumpy earl, a dashing stablemaster, some ravishment in various places, several garden follies, a lot of snow, and a horse called Lancelot.

The Truth Is Even Stranger by Charlie Richards

Officer Tian Chavez goes undercover at a college in Durango, Colorado as Tian Whithern, a gangster. It’s not the first time he’s taken such an assignment, since he looks years younger than he actually is. Finding out who’s offering strength-enhancing drugs to students and other townspeople takes a jaunt around the crazy maypole when he discovers the truth. It’s not drugs that give the ability, it’s completing a mate-bond with a paranormal creature. To his shock, he learns that gargoyles, shifters, and even vampires are real. Now, he needs to come up with a viable cover story.

To make matters even stranger, Tian runs across Chef Roman, a gargoyle who seems to think they’re mates. While he finds the huge male attractive, Roman isn’t an exceptionally personable individual. Tian isn’t certain what to make of him or his gruff, bumbling attempts at seduction. When he realizes accepting a life with Roman would mean the end of his work…plus other drastic changes to his life, can he decide on what’s the right path?

Truly Yours: Toby and Dalton by Aria Grace and Chris McHart

Finding a shifter mate is tough. Dalton is open to love, but the few dates he’s been on have been terrible. He’s just about to give up on searching for happiness when a young shifter passes by him, providing hope that maybe this time he’ll find love.

Toby has been hurt one too many times. He always picks the wrong men and doesn’t believe he deserves anything better. When his best friend forces him to check out a shifter matchmaking service, he doesn’t have any hope that things could work out for him. Because, why should Dalton be different than the others?

However, fate knows better. And both men might be in for the shock of their lives.