The Rules Of Love by Cara Malone

Maxine Saddler has never been in love.

She knows exactly what it looks like – she’s spent years studying the phenomenon in other people, but her Asperger syndrome makes it far too anxiety-provoking to attempt such a thing in her own life.

Instead, she focuses exclusively on academics. She’s 23 years old, starting grad school, and perfectly content to ignore the world beyond her textbooks. That is, until she meets Ruby Satterwhite, who makes Max want to give love one more shot.

Ruby is the consummate social butterfly – sorority president, extracurricular list a mile long, and stunning to boot. In short, she’s way out of Max’s league, and on top of it all, she kind of hates Max for how she blurts out whatever’s on her mind, no matter how blunt.

But when they’re thrown grudgingly together for a group project in their first class, the heavens open up and the sparks begin to fly. There are only two problems – Ruby’s still pining for her perfect ex-girlfriend.

It’s time to turn on the charm like never before, but can Max master the rules of love?

In the Ruins by Hailey Turner

Captain Jamie Callahan knows the Metahuman Defense Force frowns on fraternization. For once in his life, he’s breaking all the rules. Having Staff Sergeant Kyle Brannigan on his team and in his bed is worth the risk of being found out. When a mission comes down requiring Alpha Team to go undercover in order to infiltrate a criminal alliance, Jamie knows it won’t be easy. Putting his family’s name on the line is nothing compared to the role the MDF wants him to play—that of a billionaire’s son, discharged from the military, with a lover on his arm, looking to make his own shady business deals.

Kyle knows the only way to be with Jamie is to hide their relationship from their superiors. Waking up to Jamie at home is more important than being together in public, or so Kyle thought, until he comes face to face with what he’s been missing. Pretending to be a couple on paper for the sake of the mission thrusts Kyle into a world of incredible wealth and a social status he’s not sure he belongs in, but he’ll do anything to stay by Jamie’s side.

Play the game to win.

Surrounded by the enemy, Jamie and Kyle need to trust each other now more than ever. Their covers—and the life they’re trying to build together—depend on it.

In the Ruins is a 105k word steamy gay sci-fi military romance with a HFN ending that skirts HEA. There is military violence within the story that may not be suitable for everyone, as well as explicit intimate scenes not suitable for readers under the age of 18. This is a sequel to In the Wreckage and reading the first book in the series would be helpful in enjoying this one.

The rules of the game are simple. When the matchmaker matches you, you have twenty-four hours of heat, where only your mate will soothe you. What you choose to do is up to you, but the pain of not consummating those desires with your mate will most likely end in death. You are free to walk away at the end of your time together, but no one said it would be simple to head off home and forget what happened.

Matty was put into a waiter uniform and given a tray. The problem was he didn’t know what it was he was heading into, and what contract he signed for just being there.

A wolf and the night of his life will change Matty forever, as long as he’s brave enough to take what’s on offer and run.

Back to Reality by Kevin Sean

It’s Daniel’s job to help women meet their Prince Charming. So why is it so hard for him to find his own happily ever after?

As the executive producer of reality dating show My Prince Charming, workaholic Daniel Dixon has always had a hard time keeping his personal and professional lives separate. When royal bad boy Charles Lexington is brought on board to boost the show’s falling ratings, Daniel is forced to deal with the baggage which accompanies the handsome prince’s less-than-stellar reputation. As Daniel deals with drama behind the scenes, he gets to know the man behind the headlines and finds himself falling for Charles—whether he wants to or not.

Charles never gave love a second thought—but after meeting Daniel, it’s the only thing on his mind.

When Charles Lexington’s traditional English family informs him of his involuntary engagement to Lady Dolores Ellsworth, he needs a way out—and fast. The rebellious royal’s plan is simple: appearing on a trashy American reality television show is the perfect way to appall his uptight fiancee, end the arrangement and win back his freedom. Charles seizes the chance to return to a life of partying and paparazzi, but his plans quickly meet a roadblock—the show’s sexy, stubborn producer, Daniel Dixon. To Charles’s surprise, there is true love to be found on the set of My Prince Charming—just not when the cameras are rolling.

Back to Reality is a standalone m/m contemporary romance novel with no cheating and no cliffhangers. This book features sexy English accents, trashy reality television, steamy scenes, and—of course—Happily Ever After!

Working out the Kinks by Misha Horne

I learned early on that pretty much everything in life is a scam, and love’s at the top of the list. Easy to fake, maximum payout, and people just never stop falling for it. Watching my mom break hearts and empty bank accounts as we bounced from house to house taught me just how dangerous feelings could be. That’s a whole lot of hassle I don’t need.

These days, I stick to three basic rules. I don’t take something just because I want it. I don’t ask for help, even if I need it. And I never look twice at a guy who has a bigger bank account than I do. I know where those things can get you, and it’s not anywhere I need to go. I’m perfectly happy being a dive bar rock star who can barely pay his rent, chasing the dream until my time or my sanity runs out. At least, I thought I was.

Until Brett showed up.

Working Out the Kinks is a 98,000 word filthy forbidden romance novel about a grumpy, broken rock star who refuses to fall in love and a lonely, relentless, spoiled brat looking for someone to belong to. So much angst, so much arguing, so much spanking, and a touch of taboo. Avoid at all costs if you don’t like those things.

How far would you go for the one you love? How much of yourself would you sacrifice?

Trapped on a decaying Earth and cut off from the rest of the Universe, humans are no longer allowed to leave their planet. Break this one law and you die: a penalty enforced by flyers, aliens who look like angels of long-lost religions. Michael, the flyers’ leader, is the Punisher who carries out every public execution.

Adam, a young human with near-perfect memory, is committed to rebuilding Earth and a true believer in the flyers’ dominion. While Adam’s support for flyers isn’t a secret, his deep love for Michael is. Not even Michael knows, for his kind never take human lovers, and to Adam, they are too far above him to reach.

In his broken and unwelcoming world, Adam’s love can only lead to pain, loss, and disaster. Yet there is no force in the huge expanse of stars and galaxies that can stop Adam from following Michael to the end of existence. Not even Adam’s own beliefs. 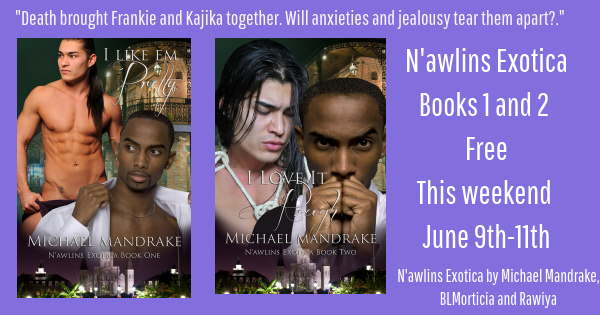 I Like Em Pretty & I Love It Rough by Michael Mandrake

I Love It Rough on Amazon

New Orleans is supposed to be the big easy. One night changes everything for Frankie Choteau.

New Orleans. A city rich in tradition, diversity, and on the comeback trail from hurricane Katrina. Francois “Frankie” Choteau, a resident of this town, a cop with a hot temper and low tolerance for bs. Kajika Fortier, a transplant from Oklahoma came here looking for a dream and unfortunately it’s turned into a nightmare. On a hot summer night, they meet and cross paths during a very difficult situation. Despite this, the attraction between them is evident and loneliness for both men is a fate worse than death. They’d both like a chance at happiness but will the circumstances and Frankie’s uneasiness prevent their happy ever after?

I Love It Rough:

Livin’ in N’awlins ain’t all that easy…

Kajika Fortier loves his job, the attention he gets from onlookers, and Frankie Choteau. However, his new partner’s jealousy, mood swings, and over protectiveness drives Kajika to the brink but at the same time, excites him to no end.

To complicate things further, a murderer is on the loose looking for blood. All three of the killer’s victims are strippers which not only makes Frankie nervous about Kajika’s safety but leaves him questioning his love for being a homicide detective. Coupled with the stresses of cold cases as well as some fellow officers shunning him for coming out, Frankie is having second thoughts about staying in New Orleans. Despite the encouragement from Vance, Kenina, and Orrin as well as new chief Quinn Murray, Frankie is wondering if his life’s passion really is to catch the killers.

Will the new couple survive these new issues that impede their nearly perfect union? Or will the relationship fail, thus leaving Kajika alone and a target for New Orleans latest serial killer? Detective Choteau and Kajika’s commitment to one another is being tested in more ways than one and they only have one another to lean on.

This is book 2 of N’awlins Exotica. Books must be read in order.

Don’t Miss the Giveaway and win a Kindle Fire!!