Hayden Knight’s job is simple. All he has to do is sell his father’s latest invention to Tate South, the Acquisitions Manager of the biggest supplier of the best in cutting-edge technology. The virtual assistant is designed to help the user in all aspects of their life, but Hayden views the holographic helper as nothing but a nuisance. Keeping his annoyance to himself is relatively easy until a major technical glitch causes Tate to see and hear Hayden’s assistant.

Hayden and Tate are thrown together while they try to figure out what has happened, and the chemistry between them is electric. Hayden soon finds that convincing Tate that he needs a Holo-Assistant isn’t as important to him as persuading him he needs Hayden in his life.

The attraction is mutual and the sparks fly. If only they could get rid of their holographic third wheel. 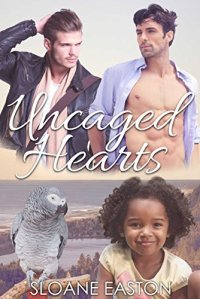 Declan has been fighting fires for most of his life, but there’s one flame he can’t extinguish: The torch he holds for his daughter’s English teacher.
Declan’s adoptive daughter, Katie, has struggled with her shyness for years, but after a few weeks with Ivan, her new English teacher, she’s suddenly coming out of her shell. When Declan meets this miracle worker, he can’t help but fall for the scholarly man. No wonder his daughter has improved so much: Ivan has an inspiring way about him. But does Ivan have any interest in other men?

Ivan thought he had achieved his purpose in life. He managed to land a job at a respectable private elementary school, and has a small class of students who hang on to his every word. However, life at home is rather empty and quiet—save for his blasphemous parrot. After he meets Katie’s father, he can’t get his thoughts off the man, until finally they both decide to start meeting outside the school grounds.

What follows is an emotional awakening neither of them knew they needed.

Uncaged Hearts is a standalone novel featuring two hot men, a cute kid, a mischievous parrot, and a happy ending for all four of them!

His Missing Pieces by M.A. Innes

Maddox was drawn to Bryan the first time they met…but something was missing.

Best friends, maybe more, they did almost everything together. They had classes together…studied together…hung out together…They were inseparable. But as close as they were, Maddox knew he was missing something about Bryan. Some kind of missing piece that would explain so much. If Bryan wasn’t in the closet, why was he so quiet about his sexuality? If he was out, why didn’t he date?

Why couldn’t he see Maddox as more than just a friend?

Bryan had no idea what to do. As much as he felt for Maddox, he’d never be able to tell him because that would mean letting him in on Bryan’s deepest secret. Maddox is the best but he’d never understand what Bryan needed…how he wanted to be loved. Right now he has Maddox’s friendship and that will have to be enough. If Maddox finds out what Bryan really wants in a relationship, he might lose even that.

Nature Of The Beast by Aimee Brissay

After sorceress Alexandra tries to kill her insane father, her fae uncle expels her from the Otherworld to keep her safe. Living among humans, she wants nothing more than to leave her past behind. But working for the vampires and the werewolves doesn’t shield her for long.
When she saves a hurt werewolf pup, Alexandra inadvertently breaks the bond tying him with the pack and becomes his new alpha. This unheard-of shift exposes her to all kind of dangers, but it’s the least of Alexandra’s worries
Back in the Otherworld, her father has not forgotten her and dispatches an assassin to kill her. But just who is this mysterious foe, and what will their arrival mean not only to Alexandra but to the delicate balance of the world?

Downtrodden and beaten by his Master, Anasa departs Nouvelle Terre for the solitude he can only find on earth. He must decide if serving a demon lord that has no love for him is worth eternal suffering. But the very thought of leaving his Master’s side chills him to the bone.

Shifter, Neil Arcenaux lives on the Mississippi River, content with his life as a loner. His ravenous sexual appetite often overrides his need for substance in his lovers. Relationships don’t agree with this gator. Why start now when life in the Big Easy is just that… easy?

When Neil spots Anasa wading in his territory, his natural instincts kick in, but not the ones he expects. Instead, Neil develops an overwhelming desire to mate with Anasa, even if only for a short while.

Surrendering to lust and passion gives Anasa a taste of what he’s always craved, but for how long?

And at what cost?

WARNING: Dark Romance! Flashbacks of torture and rough sex as well as on the page violence.

Books should be read in order. All books are in KU!