Officer Hector Castillo, a sniper on Houston’s elite SWAT team, is content living alone as a perpetual bachelor. But when he opens up his small apartment to a friend in need, their close quarters awaken long suppressed desires Hector can’t help but acknowledge.

Miguel Delgado’s unfortunate detour down a road he never intended to travel ends in a big wake up call, but he vows to get himself back on track. Though he’s always looked up to Hector, Miguel isn’t a kid with hero-worship anymore, and his schoolyard protector has matured into a strong and caring man – who happens to look damn sexy in his SWAT uniform.

Though their physical attraction to each other is undeniable, Hector and Miguel try hard to resist and protect their friendship. Until one night changes everything…

The Detective’s Pleasure by Christa Tomlinson

“You’ll kneel for me without me having to tell you to. And when you do, you’ll feel so much better. Trust me.”
– Detective Sam Roberts

Officer Ryan Bennett: An ambitious and smart young officer on Houston’s police force. He’s pursuing a promotion to the city’s elite SWAT team with a single mindedness that won’t accept any outcome but success. But Ryan wants more than a coveted position on SWAT. He wants to give himself up to a strong Dominant who will make him shudder with pleasure beneath a firm yet loving hand. Unfortunately, Ryan has had nothing but failure in that part of his life. Now, he’s hidden that dream away, and refuses to let anyone close enough to see what he truly desires.

Detective Sam Roberts: Cool and calm, Detective Sam Roberts is good at reading people, during the day as a detective and at night as a Dom. He sees past the hard layer of arrogance surrounding Officer Ryan Bennett to the hurt submissive hiding beneath. He wants to help Ryan, even though the stubborn young man resists him. He’s determined to help Ryan embrace the soft, giving nature of his submissive side. If Sam is successful, will he give the young officer the very thing he’s wanted for so long?

Saving the Super-man by Luise Collins

Kaz isn’t known for his friendly smile or his sparkling personality. He’s a man of little words and little stature. He’s perfect for customers who want food with no god-awful small talk and forced hospitality. Some might say he’s bad tempted, and he would tell them to piss off….under his breath…all he’s got is his job and he’s not going to lose it.

One customer irritates him above all others. The customer with the styled blond hair and sky blue eyes. The customer with the ridiculously stacked torso and the chiselled jaw. The customer who flies across the London skyline and make fires with his eyes. Customer, no matter the abilities he possesses, he’s a customer and should be treated as such. Kaz will not bow down to the hero’s mightier presence, he will treat him the same way he treats everyone else, in fact, he’ll treat him worse to make his point.

He is not beneath the hero, physically he is, he’s beneath most, but in spirit he can rival him. He’s been through the sting of rejection, accepted his dreams are unreachable. What he doesn’t need is the hero flaunting his superiority in front of him.

Yes, he’s handsome in a smug-ass way. Yes, he saves people with his team of enhanced beings. Yes, he acts like some eager puppy, but no, Kaz doesn’t like him and his reasons are his own… 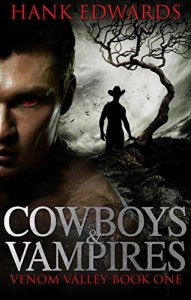 In the frontier town of Belkin’s Pass, as a vampire quietly feeds on the local saloon girls and their customers, a tragedy teaches resident Josh Stanton he has the ability to raise the dead. Knowing he is now a wanted man, Josh flees into the arid plains of Venom Valley. Dex Wells, the town deputy and Josh’s best friend, catches up with Josh. During the confrontation, both men realize their friendship is truly something deeper, and Dex has to decide if he’s a man of the law, or a man in love. As Josh and Dex ponder a viable course of action, the vampire circles ever closer, drawn by Josh’s power and gathering his forces against them.

The Devil of Pinesville by Hank Edwards and Adrian Nicolas

It’s business as usual for Critter Catchers Demmy and Cody, with one pretty major change. Now, they’re not only juggling their animal control business and decades of friendship, but the beginnings of a romance as well. Cody’s always put a time limit on his past relationships, and he’s certain he’s going to mess things up with Demmy. For his part, Demmy is pretty sure Cody will, too. But trouble arrives in the form of one of Demmy’s ex-boyfriends who contacts them about a case they might be able to handle in Pinesville, New Jersey. Sensing not just physical but romantic danger, Cody makes certain to accompany Demmy on the trip.

In Pinesville, they meet up with a handful of residents just as colorful, if not more so, than those in Parson’s Hollow. And both are surprised to find they have some competition on this case, namely the Critter Ridders, a pair of very competitive women operating their own animal control business.

As the case intensifies, tempers flare and loyalties are tested, bringing Demmy and Cody to the point where they must decide if they’re willing to save the business, their friendship, or their romance.

A Masquerade in Time by Cailee Francis

A New F/F Fantasy Romance from the author of Cynthia and Eve. Book 1 of ‘The Fae Souls’.

When I first arrived at the mansion, I couldn’t remember anything. My name, how I’d got there or who the people were around me. I knew I was a woman, and the pink dress and brown ankle boots I wore felt vaguely familiar, but nothing more.

It wasn’t long before I was told my name was Celina. I was given a suite to stay in and encouraged to prepare for the mysterious Prince Eldran’s masquerade party. I found everything I needed in my suite, other than the answers I sought.

Fragments of memory hinted at dark experiences, at love and loss, but there was no context and I was uncertain about my history and what the future might hold for me.

A stranger at the time, Sorcha found me alone as I sought solace in an empty room. I discovered she too had missing memories, and in her I found a person to talk to. A friend and more, but did we have a chance?

A Masquerade in Time is a romantic novella of just over 20,000 words, which contains strong steamy content and language.