Meet Sergeants Connor Finley and Shawn Weller—elite covert ops soldiers with Shadow Unit—a joint UK/US anti-terrorism task force. Connor and Shawn’s harrowing missions take them across the globe from London to Kuala Lumpur to India to Pakistan to Bangladesh. Fighting to stem the flow of ever-increasing terror attacks and to protect innocent civilian lives, they battle arms dealers, drug smugglers, biological weapon threats, and a madman hell-bent on revenge, facing death at every turn. Their private lives are fraught with struggles as well, Connor and Shawn battling personal demons from their past that threaten their future. Amidst a backdrop of guns, bloodshed and violence, Connor and Shawn’s love and dedication for one another never wavers, standing resolutely side by side, drawing strength from each other to continue their never-ending fight.

Less Than a Day by April Kelley

Opposites attract in a major way when Upperworld Humans and Otherworld Faeries meet for the very first time.

The door between the Upperworld and Otherworld only opens twice a year. Samhain marks one of those days and even though Talli’s Oberon forbids him from leaving the Otherworld, Talli walks right through the door. Talli has never seen a real human before. Once he gets a glimpse and experiences a bit of what the Upperworld has to offer, he fully intends to go back to his friends and the library he loves so much. That is, until the first human he sees just so happens to be his soulmate. 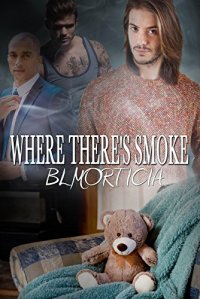 Where There’s Smoke by BL Morticia

Chicago nearly destroyed me, but moving to Cobalt, I found everything I needed to put my life back together. Or…almost everything. I have an amazing man, a job I love, and a budding career as an author. Why does it feel like something is missing?

Being a gay firefighter in a small town like Cobalt is tough, but the day I met Santiago in a coffee shop, all the struggles in the world wouldn’t keep me from his side. I’m ready to give him everything, including a white picket fence home filled with all the strange antiques he could ever want. But first I have to clear the path to our future, by digging through the wreckage of his past.

I’m no stranger to heartbreak, but I’m a man who knows how to get what he wants. Chaos in my life stole the man I love. Between my Fortune 500 company, my mother’s failing health, and my sister abandoning her daughter for drugs, I barely have time to breathe. But I rise above it all to give my niece the family she deserves. Which means getting my man back, no matter what—or who—tries to stand in my way.

Three men. Three different lives. And a chance at love just out of reach.

TRIGGER WARNING: Flashbacks and mentions of rape. On page violence.