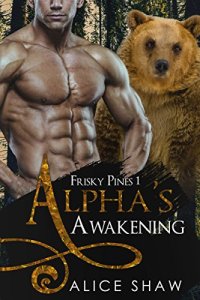 Bear shifter Logan Bishop is both protective of his omega, and loyal to the core. Destined to reclaim his fated mate, he wakes up from a terrible vision. The small town he once loved and cared for is in danger again, and it’s up to him to save it.

Growing up, Logan only desired one thing: to be with his mate forever. The jaguar shifter Jackson is handsome and cunning. He always knew they were destined to be together. When they were younger, they would crawl into bed and swear they’d never let go. Everything felt so perfect. They were on the path to living an ideal life.

But then the fires happened. Years ago, Frisky Pines was ravaged. Separated from his mate, Logan was forced to skip town to find his true destiny.

When Jackson sees him for the first time in six years, both of their lives change forever. Logan can’t help himself. Seeing his omega again is more than he can handle. Jackson becomes pregnant with twins, and they have embark on a journey together.

After years of being forced apart, Logan wants to know what love is like again. Pushed into harm’s way, he vows to protect his pregnant mate, no matter what the cost.

They make a lifelong promise to each other. They tie the knot for good.

*This is the first book of the Frisky Pines Series. This book is 26k and guaranteed to have a HEA. This book contains MM, M/PREG and all the wild & frisky adventure you can handle.*

Protecting the Omega is his mission. Falling in love is a whole different battle.
Sergeant First Class Kali Morris is the communications specialist for special forces Delta Squad. He’s the love-em-and-leave-em type of alpha.

Kali finds his latest conquest the night before a mission, except he’s attracted to this omega more than he ever thought possible.

Sergeant Thomas Carter is an intelligent Omega, specializing in dead languages. He never expected to leave a base when he enlisted, preferring a desk job to running through the desert.

Alone, Thomas goes to a local bar to fight off his nerves and falls for the tempting alpha.

But when it turns out Sergeant Kali will be with him on the mission–Thomas’ heart is in as much danger as his life is.

Alpha Kali’s duty is to complete the mission but his nature is to protect the Omega he’s claimed.

Together, these men come together in a sizzling dance under the desert sky, but they must battle their instincts to fulfill their duties. And when those duties come before their hearts, they must face the battle for their love together.
This non-shifter Mpreg romance has an HEA with no cliffhanger. It features a strangers-to-lovers story, steamy scenes, military action, pregnancy risk, emotional flirting, romantic interludes, and two sexy men in uniform on a mission for their happily-ever-after.

A Hotter Fire by Parker Avrile

Assured Elites pairs hot gay celebrities with their ideal match. But have they found the case that spoils their perfect record?

Pop singer Mikel loves brilliant older men. He’s having trouble meeting his celebrity crush, but he knows the matchmaking service can put the two of them together. So why do they insist he try a date with the hot doctor instead? This Curt guy with the silken hands is miles out of his league.

Top-flight neurosurgeon Curt can save lives, but he can’t seem to find that fabled work/life balance. His coworkers take matters into their own hands and sign him up with Assured Elites. A fun date or two with a young pop star could show Curt there’s more to life than long hours in the emergency room.

Everybody knows Curt and Mikel are made for each other. Everybody except them.

A Hotter Fire is a steamy romance that features an age gap, a doctor with gifted hands, a million-dollar toy, and a mysterious store that can disappear in a cloud of fog at a moment’s notice. Always a guaranteed happy ending, and absolutely no cheating or cliffhangers.

Each novel in the Assured Elites series deals with a different couple. Feel free to start anywhere and to read them in any order. The trilogy includes A Fiercer Heat (Book 1), A Higher Flame (Book 2), and A Hotter Fire (Book 3). 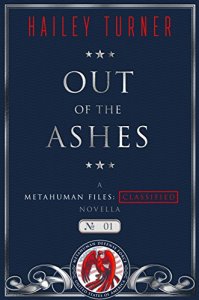 Out Of The Ashes: A Metahuman Files: Classified Novella by Hailey Turner

War never leaves a soldier behind.

Staff Sergeant Alexei Dvorkin is still healing from his brief stint as a prisoner of war. While his physical wounds have mended, the emotional scars left behind are slow to disappear. Eager to prove his resilience in the face of lingering trauma, Alexei is determined to complete his first mission in three months and get back into the field—but he’s not forging ahead without his lover.

Agent Sean Delaney’s recovery from trauma is more slow going than he would like, but he pushes through in order to return to active duty and not be left behind. But every decision he makes leaves him feeling like he’s gone two steps forward and one step back when it comes to Alexei. The guilt Sean feels from what they both endured still colors his interactions with the man he loves. Trying to overcome it is difficult and exhausting, making Sean question his place in Alexei’s heart.

Holding on is the hardest thing to do.

The ties between Alexei and Sean were frayed by the enemy’s hand. Mending what’s been broken between them will require a depth of honesty neither man is ready to face just yet. But if they don’t, they risk losing a future together neither wants to let go.

Out of the Ashes is a 28,000 word novella that follows directly after In the Blood in my Metahuman Files series and builds off of events in that book. It is recommended that you read In the Blood first before reading Out of the Ashes. There are explicit intimate scenes that are not suitable for readers under the age of 18 within the novella.

I survive on avoidance. Physical pain to avoid the mental. Disposable flesh to avoid relationships. Work to avoid attachment. My club became my empire of avoidance. Inside the ring millions are won and lost. The fight is confined to breaths, actions and reactions, fists and pain. Rules don’t exist. Only my opponent exists.

I’d been avoiding my needs for far too long when Remi stumbles into the Inferno and I’m hungry. The promise of a submissive with no attachment is far too tempting. I can’t resist him. He was only supposed to be a distraction, but I know I’ll never get over him. There isn’t a chance in this clouded hell.

If you don’t know what you want, would you recognize it if you found it?
Miguel Ramirez is the definition of pochos; a half-breed-white-washed Mexican–American who doesn’t speak Spanish (also unapologetically bisexual). Three years ago he arrived in Skagit a broken man having barely managed to escape an abusive relationship. Slowly, he’s rebuilt his life. He’s tried hard to discard his deepest desires and be happy with what life has doled out. Family feels out of his grasp, no one really wants to keep a stray after all. Except, maybe, a red-haired stranger with a galaxy of freckles covering his face who seems to encompass everything Miguel’s learned to avoid.

Nate Richardson; focused, solid, reliable, career-minded, Federal Agent. No time for relationships outside of work. Then he runs into Miguel with his crazy green eyes, rakish smile and outrageous sense of humor. Nate starts thinking about Miguel as more than just another guy. Nate was sure he didn’t care about sex and didn’t believe in love…he’d never met Miguel Ramirez before.
Things quickly heat up between Nate and Miguel. Crime is heating up in Skagit as well. Nate is sidelined when the case he is working on reaches a frustrating standstill. In the meantime, unnerving incidents transpire, some literally on Nate’s doorstep. Will outside forces—or their own baggage—keep Miguel and Nate apart? What exactly is family, and can Miguel and Nate make one of their own?

What He Craves by EM Denning

Matt Simpson is notorious for his bad decisions. From his rocky teenage years to his tumultuous early twenties, he’s made a lot of mistakes. His latest, greatest, and perhaps stupidest of them all was his recent pursuit of his boss, the unattainable Steve Paulson. Desperate to make the man notice him, and knowing Steve would never get involved with an employee, Matt quits his job.

Unfortunately, Steve still won’t touch him. To make matters worse, his new job falls through and his older brother won’t hire him. Matt can’t bear to ask Steve for help, and soon he finds himself out of money and out of options. When Steve finds him living in his car and demands that he go home with him, Matt obeys, but living with the man he’s wanted for two years proves to be frustrating as well as explosively hot. As Matt begins to explore his submissive side under Steve’s firm guidance, his insecurities haunt him. What does a homeless, jobless kid with a string of failures behind him have to offer, even if Steve did want him for more than a brief fling? 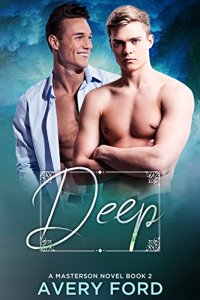 Everyone in the small town of Prescott knows who Aaron Masterson is. He’s the guy who had the s*x tape that got out. It was the most humiliating experience of his life, one that prompted him to switch schools and leave town for three years until he returned a radically changed person.

The man responsible for this hurt is Vance Chastain. A closet case flash-in-the-pan one-hit-wonder who went on to make one catchy tune before he disappeared forever. That is, until he returns to Prescott to throw Aaron’s life into chaos once more, just as Aaron is about to make one of the biggest career moves of his life.

Vance Chastain leads a charmed life. Or at least, he did. College was a breeze, his business degree was just for show. What he really wanted was to be a singer, and that, too, fell in his lap one day. His career was brilliant, and promising, for about two years. Then, one day it all fell apart.

Now he’s come home to lick his wounds and figure out how to get back the life he almost had. And while he’s off the radar, he might as well indulge his occasional taste for a short-term thing with a guy. One who is gorgeous, and great in bed, and precisely Vance’s taste—and, incidentally, the guy he’s most hurt in the world, quite by accident.

Will the two men get past the hurt and differences of the past and admit to each other that what they both ran away from, is what they want – each other?

While it can also be read on its own, Deep is the second novel in the Masterson series. Each book tells the story of one of the Masterson boys’ search for true love. The first in the series, Blaze, is available now on Amazon