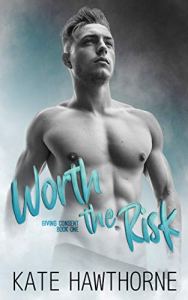 SPOTLIGHT!! Worth the Risk (Giving Consent Book 1) by Kate Hawthorne

At eighteen, Landon Miller was sure about two things–he was a submissive and he was going to be with Gregory Douglas for the rest of his life. That was until parents and school got in the way, and he found himself in New York, thousands of miles from the man who had learned how to take him in hand. Feeling abandoned by the person he’d come to rely on, Landon has no choice but to set his sights on a new and lonely future.

Seeing his first love again is the only inspiration Gregory needs to commit himself to forging his way toward the future he always envisioned…one with Landon yielding and bending to his command. Determined to recapture the magic of their first love, Gregory works to right the wrongs of their past so they can move on together.

Battling through the resentment from their youth, Landon is unexpectedly called back to New York, and Gregory can’t help but fear the past is repeating itself. Fighting familiar feelings of helplessness, he makes the decision to give Landon what he needs, even if that means not chasing after the man he adores…again. Gregory can only hope when Landon returns, he won’t throw away the love they’ve fought and risked everything for. 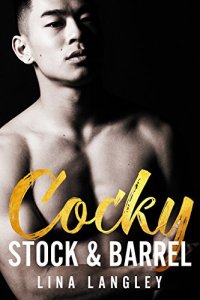 They say you never get over your first love.

For Ethan Zhong, that’s painfully true. His relationship with Alois was near-perfect, his fiance everything he could ever want–until cruel fate took Alois away. Even after years, Ethan isn’t ready to move on. He’s happier single than walking away from the memory of Alois’s name.

Until his sister hooks him up with a powerful one. One who is running for State’s Attorney.

One who is close to the governor of Georgia.

And the worst man Ethan could ever agree to date.

Good thing it’s only for show.

One arranged dinner date he can’t wiggle out of, a few minutes of political schmoozing, and Max Walter should have his political career in the bag. But Ethan’s not prepared for the shock when Max could be Alois’s doppleganger, and rouses desires and longings
Ethan just can’t shake.

He hopes a one-night-stand will get it out of his system, and give him so closure. After all, he’s heard the best way to get over someone is to get under someone–but Max isn’t someone he can walk away from after one night. Max wants Ethan. Max wants
more.

And more than anything, Max wants Ethan to beg

Content warning: This 30,000 word story contains descriptions of death, grief, D/s and puppy play. It is more erotica than romance, but it does have a HEA.

Can the touch of a rock god last forever?

Legendary alt rock singer, Aubrey King, is making a comeback after many years out of the spotlight. Rumors of his sexuality have always dogged him, and while he’s never come out publicly, his reasons for leaving the industry had nothing to do with his fear of discovery. What matters to him is the music. That’s his truth, and so far, his only real love. He aches to find someone to share his life with, but his propensity to fall fast and hard—along with chasing men he knows can never be his—has left him all alone.

Rock journalist Bryan Gallagher was first turned on to rock music at the age of twelve when he became obsessed with Aubrey’s band, Falling in Stereo. His friends, and even girlfriends, would sometimes tease him that he was hot for Aubrey. But it was all about the music and nothing else—at least that’s what he’s always told himself. When he’s approached about helping Aubrey write his memoir, it’s not only a dream assignment, but an exciting opportunity to work closely with his idol.

When Bryan meets Aubrey, the electric heat between them is unnerving. He’s further confused by how intense Aubrey’s attraction toward him is and how deeply they connect over their shared obsession of music. While Bryan struggles with uncertainty regarding his own sexuality, he also has to navigate through the perils of working with a lover and keeping their relationship a secret.

But Bryan’s biggest struggle of all might be determining whether declarations of true love from a rock star can ever be trusted. 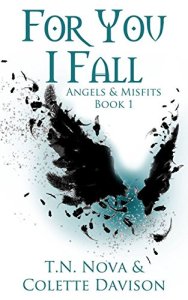 For You I Fall (Angels & Misfits Book 1) by T.N. Nova & Colette Davison