While You See A Chance by Alexa Milne

As children growing up in South Wales, Sion, Phil and Helen were known as the Three Musketeers, always together and never apart – but time moves on. Sion left to lecture in history at Yale. Phil married Helen because it seemed the obvious thing to do, and they settled down to life in Manchester.
Now all three are approaching sixty. After the death of his partner, and wanting to solve a family mystery, Sion returns to his childhood home to start again. When Helen announces she wants a divorce, Phil also returns home, to a new teaching job, and to renovate the ruin of a house he and Sion once dreamed of living in.

Dale is proud of how his acting career is progressing. Tonight, for instance, is the last night (at the beautiful Sam Wanamaker Playhouse) of a well-received run of Beaumont’s “The Knight of the Burning Pestle”, in which he plays Rafe. But his colleague Topher, who plays Jasper, seems to think something is missing in Dale’s life. They’re not really friends, and Dale sees little point in reprising the one night on which they were not-really-friends with benefits.

However! Despite the distractions of performing this chaotic two-plays-within-a-play, Dale is plagued by the niggling doubts prompted by Topher. Dale might be better off paying attention, though – because maybe Francis Beaumont, writing over 400 years ago, already provided the answers to Dale’s dilemma. 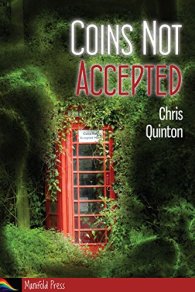 Coins Not Accepted by Chris Quinton

“Bring me the contents of the security box from the bank, and make sure you’re not followed.” Miles Carter carries out his grandfather’s instructions, and finds himself caught up in a dangerous tangle of family mysteries – and the unexpected return of Allan Warwick, his childhood friend. Add to that a parallel world and a plot to overthrow its government, both of which seem to involve his grandfather and Allan. Miles’ life will be changed irrevocably, but only if he and Allan can stay together and survive the coup.

Let Me Catch You by Kent Deron

Self-conscious, Inver Murray has come home to Clifton to bury the father he barely knew. Staying with his father’s former boss, Stephen Davis, provides a distraction from his mess of a life, and a face that continues to haunt him. Soon though, awkward interactions with Stephen, and strange happenings in the night, begin to rattle Inver who is unaware his handsome host intends to make him pay for the sins of his father.

It’s 1995 and cocky womanizer Stephen has returned to the family farm to inherit a responsibility that was never meant to be his. Feeling bored and trapped he develops an unlikely friendship with social outcast Shaun Munro. As lines between mates are crossed, Stephen begins to question what he stands for. The true spirit of their friendship betrays those around them, leading to severe consequences in a town rife with secrets, and forces Stephen to choose which path in life to take.

In The Wreckage by Hailey Turner

After surviving a horrific chemical attack that turned him into a metahuman, Captain Jamie Callahan got a second lease on life. For three years he’s been working for the Metahuman Defense Force and leading Alpha Team—all against the wishes of his family. The job requires his full dedication, so it’s no surprise Jamie doesn’t have time for a relationship. An enticing one-night stand with a gorgeous stranger is all it takes to show Jamie exactly what he’s been missing. When a mission to take down a terrorist cell brings that same stranger back into his world, Jamie’s life gets complicated.

A soldier with secrets.

Staff Sergeant Kyle Brannigan was only looking to relieve some stress after a long mission. He didn’t know the hot guy he picked up at a bar was the leader of the MDF’s top field team. When Kyle and his partner get seconded to Alpha Team to help fight a terrorist threat, he has to balance his desire for Jamie against his duty to keep his secrets safe. That gets harder and harder to do amidst regulations both are tempted to break.

Giving into passion could cost both their careers. Abiding by the rules will only result in heartache. An attack on MDF headquarters brings with it a choice Jamie and Kyle can’t escape—duty, or love?

In the Wreckage is a 100k word steamy m/m sci-fi military romance with a HFN ending. There is military violence within the story that may not be suitable for everyone, as well as explicit intimate scenes not suitable for readers under 18.

A Husband for the Family

Confirmed bachelor Martin isn’t the marrying kind. He falls over too often and other embarrassing things. Until now his only problems have been his accident prone dog and his Dad’s constant attempts to set him up with women.

Then old friend Luke shows up. He has suddenly to take care of his small niece but has no home and job. Wanting to help, Martin opens his door to them, but more is needed to persuade the authorities of his fitness to care for her. Luke must step up his game but what he’s not expecting to do is walk down the aisle with Martin to achieve it!

Incensed! Martin’s father threatens to blow the lid on them, but that’s not all. Martin realizes that his fake relationship is not as fake as he thought and inconvenient things like love get in the way.

But what should he do about it?