Dustin’s used to his manager’s crazy schemes, but hiring someone to be his fake boyfriend is where he draws the line. It doesn’t matter if the agreement’s for two days or two hours, he isn’t interested. Especially not when the guy’s intended for Connor, his onstage persona, instead of him.

But that all changes when he finds a man down on his luck with an uncanny resemblance to someone he used to love.

Four hundred and fifty dollars. That’s how much is left in Theo’s bank account. If he doesn’t come up with the cash soon, his finances won’t be the only thing that suffers. Of course, he never expected to get a job from Connor-freaking-Bates!

The rules are simple: pretend to be Connor’s boyfriend for one evening and get over two grand for his trouble. Theo would have to be crazy to say no.

But when feelings get in the way, their simple agreement will be anything but professional.

Not Boyfriend Material is a gay romance with a HEA and no cliffhangers!

Home Goal and My Goal by H J Perry

Not one but two realistic tales of gay romance set in a fictional British premier football team. These stories were first published separately in 2016 and are now combined in one volume.

Home Goal:
Jason is in the closet. He’s given up on love to play football at the highest level. He doesn’t want to be the poster boy for LGBT people in sport—and his advisors have told him that coming out will ruin his career. It’s not an issue until Scott captures Jason’s heart and turns his world around.

Scott has always been out. Funny, clever, and a terrific dancer, the science student has many talents but the man he loves requires something else—discretion. They seem an unlikely couple but neither can resist the chemistry that draws them together.

He’s cocky, he’s arrogant, he’s entitled to his big ego. He an International footballer and a multimillionaire. Carlos Garcia’s a huge success on and off the pitch, and he’s got it all. Joining a new football club, he wants his teammates to like him, especially the one man who sets his pulse racing.

As the quietest guy on the football team, Harry Carter avoids attention. He’s so scared of people finding out he’s gay that he’s made sure there are just clothes in his closet. He has nothing to hide, there’s no history, no past, no secret boyfriend, not even a one-night stand. Ever.

Together these two stories are over 90,000 words and result in a happy ending for all involved.

These stories are set in England where gay football players could expect respect and support from the overwhelming majority of fans.
Top level football, however, is an international game. In much of the world, homosexuality is still illegal, including, for example, in the 2022 World Cup host nation.
Any top footballer thinking about coming out today will be thinking about his future international career.

Catch Me by Beth Bolden

Chef Wyatt Blake is finally ready to move on from his thankless job. He gets no wiggle room, zero praise, plenty of abuse, and on a good day, he might only spend twelve hours in the Terroir kitchens. A friend of his recommends a private chef position, but despite the boost in pay, Wyatt doesn’t want to babysit some spoiled, rich LA family.

Imagine his shock when the family isn’t a Kardashian clone, but Ryan Flores, the only professional baseball player to ever come out of the closet.

Ryan is also at a career crossroads. His team’s management wants to see his more responsible side, which means no more late night hookups and no more adrenaline-charged stunts. When his agent suggests he find a fake boyfriend to give him an air of domesticity, he’s only reluctantly interested.

Until Ryan goes to a local bar and spies the cute private chef he’s supposed to be interviewing the next day. Maybe a quieter life wouldn’t be so bad, as long as Wyatt is part of it?

Wyatt believes Ryan could be more than just a crappy boss, but he isn’t sure about leaving the kitchen for the life of a professional boyfriend. Especially when he wants the reality so much more than the fantasy.

Catch Me is a 85,000 contemporary m/m romance, and while second in the Kitchen Gods series, can be read as a standalone.

Good Omegas love their masters.
Taavi has never been particularly good.
“Dark desires mean the games I play in the bedroom have to be hidden from prying eyes.”

I’m not going to repeat the same mistake twice. The next toy I buy will be perfect. And Taavi really is all that, and more – except he has a smart mouth, and I have a short temper.
He better not start digging around my past, or he might find himself with no future.

“I didn’t choose this life. But I never thought I could fall in love with the Alpha who bought my body.”

I can’t help my natural curiosity. Will is intriguing, and I have to uncover all his secrets. With each thread he pulls, he unravels another one of my inhibitions.
But I want to play, too. I want to know his deepest, darkest thoughts… Even though they could mean my demise.
This book features dark romance themes. You have been warned.

The Subs Club by J.A. Rock

A year ago, my best friend Hal died at the hands of an incompetent “dom.” So I started the Subs Club, a private blog where submissives can review doms and call out the douche bags.

A perfect example of the kind of arrogant asshole I mean? The Disciplinarian. He has a pornstache. He loves meat, stoicism, America, and real discipline. And he thinks subs exist to serve him.

But . . . not everything about him is awful. His Davy Crockett act just seems like a cover for his fear of intimacy, and part of me wants to show him it’s okay to get close to people. And, I mean, sue me, but I have fantasized about real discipline. Not role-play, but like, Dave, you’re gonna be thirty in four years and you still work in a mall; get your ass in gear or I’ll spank it.

Not that I’d ever trust anyone with that kind of control.

I’m gonna redefine “battle of wills” for the Disciplinarian. Or I’m gonna bone him. It’s hard to say.

*This is a re-release of the 2015 novel originally published by Riptide Publishing. No significant content changes have been made.
**The Subs Club series can be read in any order. Jump right in!

Freshly enlisted in the Highland Regiment, he does all he can to steer clear of responsibility and commitment. Just not his cup of mead, that. Loose of tongue and even looser of morals, he rarely misses an opportunity to get into trouble—and into the other archers’ knickers, too.

In a unit composed almost entirely of Dark Elves, Hernan Seinnés, with his green eyes and auburn hair, is an outsider. When Verhan, up the creek again, is blackmailed into helping Hernan, he never expects to fall for him. But during the long hours spent training Hernan for the Honour Guard, feelings strike the Highlander right in the heart—and with the force of an arrow.

Unversed in relationships, Verhan finally plucks up enough courage to tell Hernan how he feels, only to drive the Asirhwӱnian away instead. If Verhan can swallow his pride, he might get one last chance to show Hernan what he means to him—and maybe this time he can hit the mark. 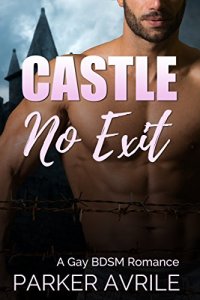 Castle No Exit by Parker Avrile

And then Hammond is assigned to investigate the abandoned castle dogged by rumors about men who disappear never to be seen again. What does Jason know about the mysterious dungeon? Why does he keep trying to warn Hammond away? If it’s kinky and involves shackles, versatile Hammond is confident he can navigate the scene.

His high school crush is his new pain-in-the-ass boss…
And he’s hiding a secret.
Jaxxon Avery broke my heart in high school, then disappeared without a trace. When I start a new job, I’m expecting to forget all about that bad boy Alpha… Until I meet my new boss.

It’s none other than Jaxxon himself, and he seems to be badder than ever and so, so much better…
I don’t know whether I should resist his charms or try to uncover his dark secret.
But one thing’s for sure… I’m under his spell.

Ben currently hates everything: The accident that temporarily put him in a wheelchair, the fact that he has to go for rehab and live in an assisted living home as well. He just wants his old life back.

But things aren’t easy. The truth may destroy them.

Too Close by R. Phoenix

Skylar Orion’s life has been complicated ever since his mother abandoned him and his sister Evie. Making ends meet seemed impossible until Tate Chandler took them in — his knight in shining armor who promised to make life about more than just surviving. But Tate is not the man he seemed to be, and even his whispered I love yous and generous gifts do little to soothe the pain he causes. Knowing he can’t give his sister all that she deserves without Tate, Skylar stays with him, relying on bad puns and a worse sense of humor to keep up the charade.

He will do anything for his sister, even if that means acting the responsible adult and going back to his old high school to meet Dexter Weston, the hot math teacher who can make even algebra interesting. Sparks fly between the two of them, but with his dependence on Tate, Skylar isn’t free to follow his heart. He wants what is best for Evie, but can he pass up the chance to find love that heals instead of harms?

Warning: This book contains scenes of domestic violence/abuse that some may find triggering to read.