As his muscular, submissive boys grow more confident, Dare couldn’t be more proud of them. Each step they take brings them all closer together and gives Dare glimpses of the family they’ll become. They just have a few hurdles to get over first, like the fact that his boys need to move and that they aren’t exactly forthcoming with what they want from a Dom or a boyfriend. Dare isn’t worried, though. He’s seen the way they look at him and each other. That much love and tenderness means nothing can stand in their way.

Scott and Ryan know that relying on Dare to give them the push they need might not be the best idea, but they can’t help looking at him for guidance as they figure out what submission means to them. As their Dom, he’s the natural person to lead them through the start of their new relationship, but they both know eventually they’ll have to start opening up and letting their Dom know exactly what they want…his love and domination.

Baxter Bryan is the nerdy half of BaxCo, a start-up in Portland’s Silicon Forest creating cutting-edge high-tech toys. He’s also a hermit. When BaxCo sponsors the Portland Rock and Roll Half Marathon, Bryan decides to break out of his comfort zone and do more than listen to the music with a beer in hand. The race has barely started when he bumps into a fit, handsome man, causing sparks to fly. But the long hours needed to make BaxCo a success aren’t the only reason Bryan spends most of his time alone in his apartment.

Cay Nissen runs every day to stay in shape. He would love to run away from his job in a Silicon Forest cube farm, but keeps returning to support his teenaged daughter. His true love is music. Cay writes songs for the band he helped form in high school but doesn’t see any way to turn music into a career. The half marathon seemed like a decent way to pass a Saturday, make his boss happy, and catch a performance of his old band all at the same time. When he meets a man who sparks his interest, the safety of his cubicle isn’t the only part of his life that’s in jeopardy of changing.

Under Control (Under His Heel Book 3)

Agreeing to transport goods for a notorious crime syndicate isn’t the best choice Tracht had ever made, but reneging on that deal could have dire consequences for him. When it all goes sour, it’s up to Alex to pull Tracht out of the fire.

Under Control is the third book in the Under His Heel series and is not a standalone. It features dark kinks and an unhealthy central relationship.

His Reluctant Cowboy by A.D. Ellis

Out-and-proud volunteer dance instructor, Reid Alexander, is a California boy accustomed to living in flashy luxury. He is less than thrilled upon inheriting his late grandfather’s South Dakota horse ranch. Yet he must endure three months of cowboy hell before he can even consider selling the property.

As the ranch foreman, Walker Corrigan’s entire life is Pine Ridge. When Reid arrives with cold-hearted plans to sell, Walker endeavors to endear the place to the younger man.

Reid is unprepared for the sudden attachment to Walker, the land, and – unbelievably enough – the horses.

Walker’s long-suffering heart takes an unexpected gallop straight toward Reid. Both men are on-board with exploring their relationship, and Reid discovers ranch ownership is more gratifying than he’d once imagined.

But Reid is forced to reconsider his place on the ranch when threats put the property and employees in danger.

Menacing events call Reid’s integrity into question, and he considers saving everyone the hassle and throwing in the reins. But how can he leave when his heart now feels at home on Pine Ridge Ranch and in Walker’s arms?

Not So Vanilla by Morgan Noel

Bartholomew’s life is perfect. He’s got a job he loves, he’s in a committed relationship with his loving boyfriend who appreciates his neurotic tendencies, social anxiety, and general awkwardness. It’s not ‘white-picket-fence-and-Golden-Retriever’-perfect, but their nice little apartment in the city and the cat they rescued from the shelter come pretty close.

The domestic bliss gets disturbed when his boyfriend Kyle brings a very hot friend from high school into their sanctuary, making both of them wonder if perhaps ‘perfect’ is as relative as good sex.

Of Gods and Monsters: Menoetius by Wulf Francu Godgluck

Go ahead…hate me.
Slaughter me against the wall.
I never introduced myself as the goddamn hero. Even labeling me a pussy bad boy.

I’m an imperious villain! A tyrant cut from the bone of the worst kind of monster.

This is my story and I won’t change it for anyone in the world, but…

For him? The one who calls me Master… This is no forever fairy tale romance. This is RAW. This is ripping your heart out and trampling it till there’s nothing left but an angry bloody mess RAW.
He was the one who saw through my cracks, who would suffer my pain, blood and tears, working to mend those still bleeding wounds on my soul.
He stood through my violent storm, hiding the battle raging inside him, one I was too stupid to see, that was tearing apart the only man I would ever love.
It took almost losing him to see that, to understand, to comprehend what he truly was to me.

From KU Fun for December & January! Check out more here. 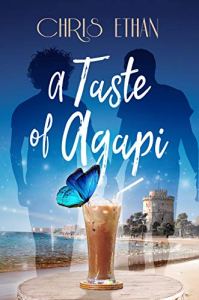 A Taste of Agapi by Chris Ethan

Jimmy has a secret.

But when he meets Ren, he can no longer hide it.

Ren is an adventurous comic-book nerd.

He transfers to Thessaloniki, Greece in an attempt to find his place in the world.

What he gets is more than just an escape from his academic family.

Jimmy is a hard working man.

After losing his mother, he has put his heart and soul into finishing his studies and helping his dad through his financial difficulties.

When he is introduced to Ren, Jimmy initiates him into the coffee-and-chill culture of his Greek city.

But something awakens in both of them.

Something neither can tame.

Can the two boys be more than just friends?

And what is that feeling called? That feeling they can’t seem to shake off?

A Taste of Agapi is a sweet, low-angst, coming-out romance with some swearing, a little bit of geekiness, a lot of Greek culture and a happy ever after.

Grab your copy today and find out what Agapi means! 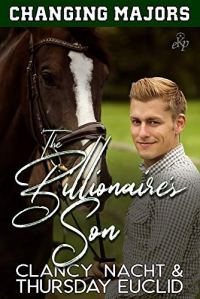 Reckless and handsome Dane Peters is a good-for-nothing trust fund baby: listless, indecisive, and better known on campus for being a wild ride than a smart student. Desperate to stay in college and out of the real world, Dane changes his major once again—this time to English, whose department dean is a Peters family friend.

To keep party boy Dane on the straight and narrow, the dean assigns penniless lit geek and grad student Hugh Halberstadt to mentor Dane so he can graduate and take his place as heir to the family empire. Unfortunately for everyone, Dane isn’t ready to grow up, and as much as the reserved Hugh wants to help, Dane could be a dangerous distraction from the thesis paper Hugh can’t afford to put off.

Awkward with their growing affection, the pair are forced to contend with their radically contrasting lifestyles as the end of semester—and Christmas—approaches.

Will Hugh teach Dane to be a responsible adult? Can Dane convince Hugh that spontaneity and fun aren’t a bad thing? Will this odd couple overcome their differences, or will the end of the semester be the end of their time together?

Changing Majors: The Billionaire’s Son features a sexy screw-up bisexual avoiding adulthood by any means necessary, a brainy Bronte-obsessed bookworm struggling to make his immigrant mom proud, an impromptu runaway horseback ride, a surprise Christmas gift to swoon for, and a relationship that shouldn’t work combined with chemistry that just won’t quit.

Daring The Neighborhood by Jaylen Florian

Neighborhood men getting together for a game of night basketball expect just another friendly competition.  Nude modeling is the furthest thing from their minds.

But amidst all of the bravado and trash talking, one player proposes raising the stakes.  His dare is simple.  The winning team splits a cooler full of beer, while the losing teammates pose in the buff for his “Masculinity and Tenderness” fine art painting series.

Three men, convinced they will triumph, are not expecting any shocking adventures.  Vance is a confident young police officer with a robust libido.  Mike is a 30-year-old businessman with an athlete’s body and a private jacuzzi.  Weston, the manager of an electronics store, considers himself homely and sees nothing special in his unique facial features. 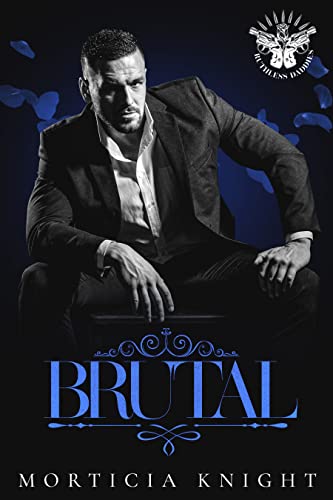