Van doesn’t care if Omar is his fated mate — or whatever other bullshit the world believes in. He’s not going to be trapped in a relationship because the universe says he should be. Worse yet, Van’s not a huge fan of overbearing, entitled, pretentious alphas. Tired of living under the rule of alphas, he runs away to Salvus, a city governed by betas… only to discover that having their protection may not be as idyllic as it sounds…

Omar knows his mate hates him — or at least, Van hates what he is. Even though they have an explosive relationship centered around Omar helping Van through his heats, he still cares enough to agree to take Van to Salvus. But once his mate is gone, he discovers Salvus hides sinister secrets.

*Salvus contains a CLIFFHANGER ending. Its sequel, Escape, has an anticipated release date of early September.* 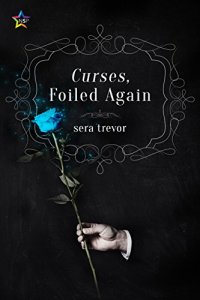 Felix is a vampire—a fierce creature of the night who strikes terror into the hearts of everyone unlucky enough to become his prey. Or at least, that’s what he thought was true, until he met John. John is completely unimpressed with Felix, much to his dismay. Felix becomes fixated on proving his ferocity to John—and when that doesn’t work, he strives to make any impression on him at all.

John is a witch, and as all witches know, vampires are notoriously stupid creatures who only have the power to hurt those who fear them. Besides, he’s under a curse much more frightening than any vampire. Felix’s desperate attempts to impress him annoy John at first, but gradually, they become sort of endearing. Because of his curse, John has pushed everyone in his life away. But Felix can’t be hurt, so there’s no harm in letting him hang around.

Felix is technically dead. John has nothing left to live for. But together, they might have a shot at life.

This dark and witty vampire romance for adults is complete at 100,000 words, with no cliffhanger. Despite some dark twists and turns, it ends with a solid HEA. 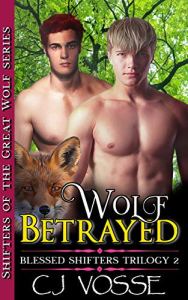 War drove them apart.
Can love bring them together?

Pierce wants nothing more than to reunite with the family he left at sixteen. When he is finally given the means, he must choose between Cade and his dream.

Cade left Great Wolf Valley and found a new home in New Kings City. He broke his vow against killing to fight in the Night War, and when he meets Pierce, he must betray his mate to save his new home.

How can their love grow when the price of loyalty is everything?

If you like hot shifters fighting for love against humans out to destroy all parahumans, werewolves intent on obtaining a demonic ruby, and a three-hundred-year-old vampire with secret goals, check out Wolf Betrayed, the second book in the paranormal romance Shifters of the Great Wolf series. This sexy, action-packed romance contains steamy scenes with a guaranteed happily ever after, no cheating and no cliffhanger.

Wolf Betrayed is the second book in the series. Each book is self-contained with a unique couple. For maximum reading enjoyment, we recommend you read them in order since each book builds upon the last with main characters from previous books showing up in later books. 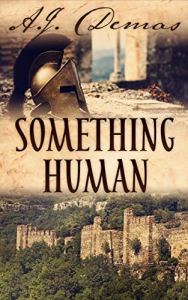 Something Human by AJ Demas

Something Human is a standalone m/m romance set in an imaginary ancient world, about two people bridging a cultural divide with the help of great sex, pedantic discussions about the gods, and bad jokes about standing stones.

SALE: FREE (usually $3.99) on Amazon and available with KU

For as long as fae Bram can remember, he’s been anxiously awaiting the day he reaches his maturity. As a life-giver, it means his Alpha will finally become known to him and he can begin his own family. But when his one true mate doesn’t appear, the devastated omega fears he must be broken.

Nerdy human Darby has been dumped by his boyfriend via email. As if that wasn’t bad enough—his job sucks, his tiny apartment is a hovel and he has no social life. And now he’s hallucinating that the cute twink who shows up in his dreams is in love with him. Clearly, he needs professional help.

When Bram learns that his Alpha is a human, he must cross the veil so they can be together. However, no fae can survive on the earthly plane for long before they die. If Darby doesn’t believe he truly exists, then Bram will have no choice but to leave his fated mate forever.

Convincing a flustered human that fairies are real has never been so annoying—or so dire. Because now, there’s more than one life at stake…

Note: Entwined is a standalone, mpreg romance story featuring a feisty fae omega, confused human Alpha and lots of fluffy feels. You can expect knotting, a dose of angst and a hard won happily-ever-after, complete with a sweet, surprise baby. 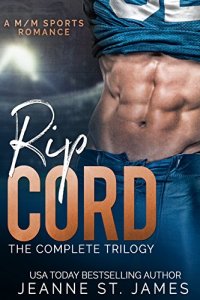 Gil Davis hated high school. Ever the geek, he has no intentions of attending his 10th year class reunion. The last thing he wants is to relive the taunting and teasing he received during his teenage years. However, there is one thing he misses from high school: the star Varsity football player. The one he had a crush on from the first day he laid eyes on him. But the last thing he expects is the now pro football player to come back to their home town to attend a lame high school reunion. Known as the Bad Boy of the NFL, Ripley “Rip” Cord, not only shows up, but shows up without a date and an eye for Gil.

Geek Gil Davis hasn’t heard a word from NFL player, Rip Cord, since hooking up at their class reunion. Then Rip calls him unexpectedly, he’s taking Gil to his cabin for a weekend of exploration.

When Rip Cord is kicked out of the NFL, he shows up unexpectedly at Gil Davis’ front door. With his career over, Rip’s finally ready for a future with Gil, if Gil’s willing to give him another chance.

NOTE: The Rip Cord trilogy was previously published as three separate novellas. It has now been combined into one edition. This is a gay second chance romance with a guaranteed HEA.

Trusting the Elements (Never Too Late Book 1) by Elle Keaton

There’s nothing like a near death car accident to open your eyes. Otto Proulx decides surviving was a sign; he’s being given a second chance to claim the life he wants to live. For the past few years he’s been hiding in the shadows, vague texts from a troubled ex-partner keep him at home along with his general lack of luck in the romance department. This is his last chance, he’s certain, this time he’ll meet the man for him, the one he’s sure is out there somewhere.

Greg Trainor runs a specialty kite shop and helps his friends out when they ask. That’s the kind of guy he is, if somebody needs something, they call on Greg. He’s a big guy and no genius, but he’s dependable. So…yeah, when he sees a car precariously perched on the side of the road, he stops to help out; it’s what he does.

One night of passion leads to…several more and suddenly both men are searching around to define what they have together. Neither wants to scare the other off and neither wants to ask for more. Will the two men be able to set aside their fears and create a family together, trusting the elements are in their favor?

My Cameron by MA Innes

He knows better…but he can’t help himself.

Dating someone who lives next door is a disaster waiting to happen. Cameron knows better than to agree to date the sexy new alien that’s moved into his apartment building. Just because George is confident and persistent doesn’t mean it would be a good idea. It also doesn’t mean that George understands what Cameron is really looking for in a partner…a Dom who can push him right to the edge.

Aliens landing and asking for asylum was supposed to be the plot of a sci-fi movie, not a sexy romance that’s hotter than anything on cable. But maybe the Dom of his dreams won’t come in the package Cameron always expected. Maybe Mr. Right has tentacles.

Author’s Note: While the heat level in this story is higher than some of my books, and there are tentacles involved, it is very much a sweet romance at heart.

Rich Cody joined the U.S. Marshals to hunt down bad guys, not babysit witnesses. Orders are orders, though, and now he’s protecting a hacker with ties to the Albanian and Sicilian mobs. It’s just another exciting day in WITSEC.

Leotrim Nicolosi was born into a world of crime and bloodshed. When that bloodshed hits too close to home, taking down Leo’s boyfriend—the son of a notorious mob boss—Leo is determined to destroy the Grimaldi family. He’s got evidence that will send every last Grimaldi to prison, he’s got the family’s wealth in an electronic chokehold, and he’s got a vendetta that can only be settled with the blood of the man who killed his lover.

When a routine transfer to a safehouse goes horribly wrong, Rich and Leo narrowly escape with their lives. With the Marshals compromised and Leo being framed for murder, he and Rich are on the run from criminals and law enforcement alike. They have no one to trust except each other, and nowhere to go that their enemies can’t reach.

And the only way out might mean making a deal with the Devil.

This novel is approximately 77,000 words long.