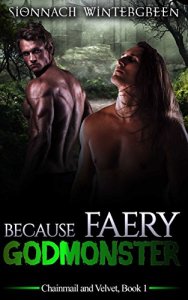 How can they get together with a monster in their way?

The warrior-priest. Gossamer wants true love. But his faery godmonster, a gigantic, winged, two-headed beast named Puff-puff, is determined to keep him “safe”–even from a broken heart.

The necromancer. Pox is a sexy fugitive. An exiled aristocrat, his ego is as big as a dragon’s maw. He has no time for love. Still, that brawny Gossamer might make a fine manservant.

**This gay romantic comedy contains four graphic, sexually explicit scenes and is intended for adults only.
(It also contains crude humor, a love story, and a big scary monster.)

This collector’s edition features a brand new cover, improved formatting, and the first chapter of the second book in the Chainmail and Velvet series! 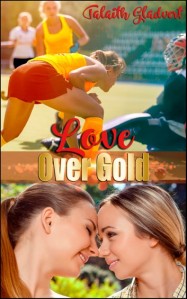 The Drive to succeed, to be the best you can.
Every Olympian needs such a drive, needs to be obsessed with winning in order to have a chance of doing so. In many ways, it’s like Love: It dominates your life, your feelings, your perception of the world. It’s impossible to win Gold without it.

But what if Love and Ambition clash? What if the person you loved was also your opponent? What if your euphoria could only come at the cost of your beloved’s angst? Or vice versa?

Would you choose Love over Gold? Should you? Could you achieve the highest pinnacle of your career, the moment you’ve always dreamed of – if the cost was to crush your lover’s dreams? And, if you did, could your love survive?

Pre-order now at the special discount price of $4.99 ($6.99 after publication) at Kobo and Smashwords. 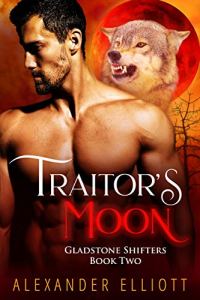 Equality doesn’t come easily, and Ben Blair’s Gladstone pack is about to pay the price.

Opposed to inclusion, Lyle Wilburn is determined to eradicate gay shifters and will stop at nothing to get what he wants. Is this the end of Ben’s dream or does Luna have something else in mind?

Amid plans for self-defense, Gladstone continues to thrive even as Ben’s Second, Nolan Sweet, is rejected by his mate. As he and his packmates prepare for an epic battle, Nolan’s heart aches for his beloved in the face of an uncertain future.

This second book in the series is packed with all the romance, drama, intrigue, and action you’ve come to expect. Welcome back old friends and exciting new characters as you follow the lives, love, and loss of the Gladstone Shifters in TRAITOR’S MOON! Notice: This story contains explicit M/M content. 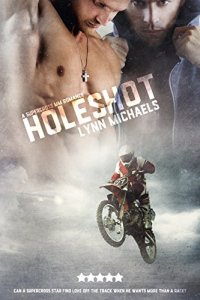 The Holeshot by Lynn Michaels

In the world of Supercross, taking the holeshot means one racer leaps ahead of the crowd and into first, leaving the rest of the pack behind. If Supercross racer Davey McAllister knows anything, it’s how to take the holeshot. When the hot rising star mechanic, Tyler Whitmore, shows up in his bed, Davey does just that. But, dating a competitor’s mechanic threatens to blow his ride if anyone finds out. With the fear of losing his sponsors, he has to keep his love life completely under cover, but Davey is in deep and wants to tell the world how much he loves Tyler.

Tyler Whitmore wants to be out of the closet, but dating the competition is a death sentence for his career. Overprotective of Davey’s reputation and his own dreams, Tyler refuses to commit to his lover and is afraid of falling hard. Will they ever be able to find their way through the Premiere racing league pitfalls and acknowledge their love? 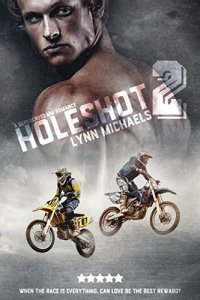 In the world of Supercross, taking the holeshot means one racer leaps ahead of the crowd and into first, leaving the rest of the pack behind. Supercross racer, Tate Jordan, wants to take his holeshot on and off the track, but no one else seems to cooperate. His love life is in turmoil and his sponsors don’t expect him to win. Will Tate find someone new to love and a team that believes in him?

Pilot Mahan is a bodyguard and a street fighter looking to build a future, but his plans get derailed when a Supercross racer catches his eye. Can he make a go at a life with Tate Jordan, on the road?

Bryce Nickel is new to Supercross and adulthood. He’s young and fun, but super serious about what he wants. And what he wants is to win races and Tate Jordan. Will he be able to take his holeshot or will the big Apex bodyguard get in the way? Or perhaps, the three can make a compromise? 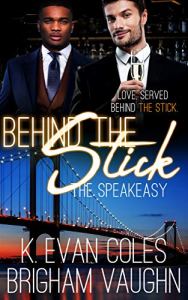 Book three in the Speakeasy series

Love, served behind the stick.

Kyle McKee lives a charmed life. He co-owns Under, an uptown speakeasy, where he is chief mixologist. Friends poke fun at Kyle’s tiny one-bed apartment in Chelsea, but they’re the best support system a man could ask for. Unfortunately, Kyle’s lackluster love life has led him to take a break from dating.

Harlem resident Luka Clarke is a lieutenant with Engine 47, the Pride of Morningside, where he carries on his father’s legacy with the FDNY. Luka, who is mixed race and bisexual, has his eye on Kyle, whom he met at a local burger joint and he just needs to make time to visit Kyle’s bar.

Before work one evening, Kyle is trapped inside the luncheonette when a fire breaks out. Luka’s firehouse answers the call and he connects with Kyle again under the most unexpected of circumstances. When Kyle gratefully invites Luka and the firehouse squad to Under, the flirting between the two men leads to a date.

Kyle and Luka quickly grow close, but Luka’s mother and sister distrust Kyle for being both white and gay. Luka believes his family will come around and accept Kyle in the end, but Kyle is not optimistic and hides his disquiet as attraction blossoms into love.

Kyle and Luka’s near-idyllic bubble is shattered one evening after a hate crime leaves them scarred, inside and out. Shaken, they put on a strong front but struggle inwardly against fear and personal demons. As the emotions seething beneath the surface finally come to a head, both men must decide if they have the strength to find love enough to conquer hate. 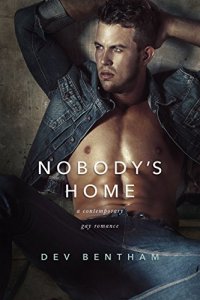 Second chances can appear where you least expect them.

An artist: You can’t go home again—that was Nick’s motto for the past twenty years. He was a teenager when he left his abusive, mentally ill father back in Lacland, a small town in the northwoods of Wisconsin.

Nick’s made a successful life for himself in New York. Then comes the call—his estranged father has killed himself. Nick flies home to a house crumbling from years of neglect, and one very fat bulldog.

And a veterinarian: Jonas doesn’t love his job enforcing university research protocol. His passion is working with dogs, especially volunteering for his boyfriend’s behavioral studies projects. But when he discovers his so-called “life partner” is messing around, he leaps at a job offer in a small town miles away.

In spite of the grief swirling around Nick and Jonas, their first meeting is electric. But Nick will be in town for only a short time and Jonas is still stinging from the betrayal. The men try to keep their distance, but that’s easier said than done, especially in a small town where misery and hope share the same address.

This poignant story about two mature gay men will warm the hearts of readers who believe happy endings are within anyone’s grasp. 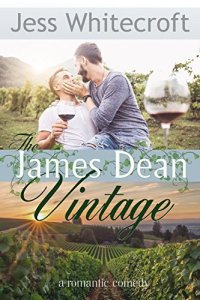 Winemaker Oliver Caron is used to micromanaging, so when a misguided Vegas marriage and a series of interlocking poor decisions lead to him accidentally introducing a one-night stand as his new husband, he can’t let the matter lie. Driven by social embarrassment and the anxiety that the messy truth might kill off his ninety-nine year old grandmother, Oliver finds himself ‘married’ to one James Dean Jackson.

Hustler, card-counter, lapdancer, drifter – Dean is seemingly a chronic liar, a human tumbleweed incapable of putting down roots. By contrast, Oliver is as deeply rooted as the grape vines that are his livelihood. Oliver’s idea of heaven is a 1945 Chateau d’Yquem, while Dean thinks veraison is a cellphone provider and once almost did the Pinot Noir monologue from Sideways over a Laurent-Perrier Rosé.

As the season unfolds and the grapes ripen, the mismatched pair begin to discover that playing the perfect husband isn’t so hard after all, especially when the other person might just have the thing you were missing all along. 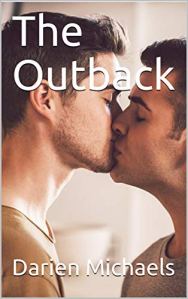 The Outback by Darien Michaels

PRESENTING THE FOLLOW UP TO THE ACCLAIMED GAY ROMANCE – “OZ”, “THE OUTBACK” BY DARIEN MICHAELS

Mitchell Saunders is a man with a complicated past living in Melbourne, Australia. He has almost given up on love after another failed relationship. Brent Christensen wears the scars of growing up as a closeted gay man in a conservative family. When Brent meets Mitchell, something awakens in the two of them that one of the them never expected and the other had given up on. But will the two be able to move on and leave the past behind?

In the second part, a hurt Leon craves for vengeance but how will his vendetta affect Mitchell and Brent’s budding romance? 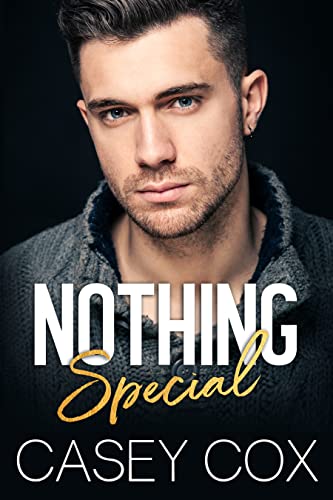