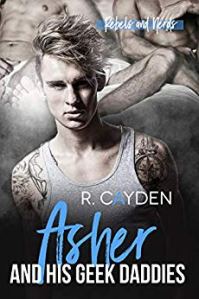 SPOTLIGHT!! Asher and His Geek Daddies (Rebels and Nerds Book 4) by R Cayden

Asher is a livewire with a cocky attitude. Even he knows that he’s bad news. Like his dirtbag father said, the only thing he’s ever been good at is driving a getaway car.

Franklin and Rory can’t deny this bad boy what he needs. The geeky men swear that their new handyman is a bad idea. Too young, too cocky, too unpredictable… And impossible to resist. 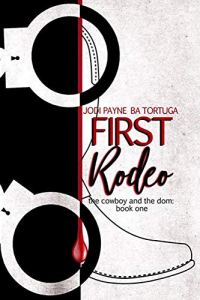 When a killer strikes, Sam O’Reilly, loses his older brother and Thomas Ward loses his lover and sub. Sam, a rodeo cowboy, plans to bring the murderer to his own brand of justice, while Thomas, a sophisticated New York City Dom, looks for a legal resolution. Despite the undeniable attraction, transcending their differences will prove difficult. And when the killer steps out of the shadows, this time, his sights are set on Sam.

“If you were mine, I’d treat you like gold.”

How to avoid being romantically incorrect: When your eyes meet his across a crowded room and your heart jolts to a stop, don’t mistake lust for love. Never follow him to a public restroom to tell him how you feel. Don’t stalk him online or to a trendy gay bar in L.A. And do not give him advice on breaking up with his billionaire fiancée who treats him like crap.

Finally, do not offer your house as a haven when the press hounds him, or your arms for comfort when the pressure all around him breaks him into a hundred little pieces. And, whatever you are hoping for, DO NOT let him model nude for a new art series you are painting.

Artist and model. They hardly know each other. They’ve never dated. But neither can stop craving the other.

Brandon accidentally picks up a hitchhiker of the ghostly variety. Donovan is NOT pleased. FBI Medium Mackenzie Lafayette is not at all what Brandon expects. Returning to Nashville can wait. He’s got a sexy medium to figure out first.

Join Lord Alexandre and his concubine Valentin as they indulge their appetites, their proclivities and their ambitions. The nobleman Alexandre has pledged to the male concubine Valentin, despite Valentin’s unfashionably large dimensions. And grateful Valentin is only too pleased to do anything in his power to increase the nobleman’s pleasure—not to mention his status at Court…

The Nobleman’s Story collects the first 5 stories of the series in one volume.

The Holeshot by Lynn Michaels

In the world of Supercross, taking the holeshot means one racer leaps ahead of the crowd and into first, leaving the rest of the pack behind. If Supercross racer Davey McAllister knows anything, it’s how to take the holeshot. When the hot rising star mechanic, Tyler Whitmore, shows up in his bed, Davey does just that.

Kyle Blyss lives to tear up the track on his motorcycle, and touring across Europe is unbelievable. Meeting up with his cousin, an Army Ranger, who he looks a lot like, only adds to his adventure. When he meets his cousin’s friends, Kyle is excited by the lust that pulses between him and the sexy CIA agent, and he’s eager to explore the connection.