In a perfect world, Lucas West would meet the Little he’s fantasized about, and so would Colt Carter after he’d retired from the Air Force. In reality, the two Daddy Doms met each other. While waiting out a storm, there was only one way to tackle the chemistry between them, even though they both agreed it was a horrible idea.

A Runner-Up in this year’s Rainbow Awards (Best Bisexual Fantasy Romance) is now available in audio!! Narrated by the fab Cornell Collin, no less:

A tug-of-war between Fate and Choice won by Love!

I am who I am: flamboyant, androgynous, comfortable in my own skin — well, there’s that one thing, but generally I am me, and I love it that way. It’s easy to ignore scars from the past, especially when they can be covered up and forgotten. What I don’t love is having to spend time in my hometown after having escaped the bullies there years ago. The only plus side is meeting up with one of my best friends again… and his brother Kane.

Who the heck expected him to end up as a hunk of a guy, tattooed and sexy and all that? It’s just a pity he’s straight. Or maybe not interested in anyone at all? Or…?

I can’t figure him out. But I never back down from a challenge, that’s for sure, and I want to see what’s really going on behind those beautiful, troubled eyes.

Fletcher Morgan doesn’t like a single thing about Archer Waverly—not his pretty face, his wicked wit, or his perfect body, and especially not the way Archer flirts with anyone and everyone.

Archer thought Fletcher could be the silver fox of his dreams…until Fletcher opened his mouth and told Archer exactly how he felt about him.

Sparks fly every time they see each other proving hate is as potent as lust and enemies with benefits just might be better than friends with benefits.

What you have waited for is here! Book three, Voice, of the Crossing Nuwa series that feature rare male snake shifter, Robbie, and his boyfriend technomage, Theo is scheduled for release December 21st, just in time for Christmas.

The Daddy Clause by JS Grey

Niko Calus wants everything Will Fisher has to offer, but there is one problem. Niko has a secret, one that could change the world forever. Caught between his obligations to the family business and the inferno of desire ignited by Will, Niko must make a life-altering decision that had far-reaching consequences.

Can Will find happiness back home? Or will his past come back to make this Christmas not so merry?

You better watch out!

NEW RELEASE: $ 4.50 on Amazon and available with KU

Not So Perfect (The Real Thing Book 4) by Emma Lyon

I know better than to get involved with Phineas Quinn again, even if we can’t seem to keep our hands off each other. Turns out my buttoned-up, perfectionist lawyer is just as hot under the sheets as he always was. And I’m just as bad at resisting him. But this time I won’t be happy with second place. I know what I want, I just have to convince Quinn to take what he wants too.

A burned-out executive.
An undercover journalist.
Trapped in a hippy-trippy wellness retreat.

If Cayden has to drink one more kale smoothie, he’s going to punch someone.
Well, maybe a tree…
There are more than enough in the surrounding rainforest.
Besides, kale isn’t the only annoyance.
The supposedly-straight guy in the cabin next door is far too sexy to be parading around in that teeny-tiny red swimsuit…

If Dane gets ogled by one more woman in a floral kaftan, he’s going to scream.
Well, he would…
If he was in the habit of revealing his true emotions.
Mind you, he can cope with ogling from the hot-as-hell guy with the eyes of a lion.
It’s just hard to trust a man overflowing with secrets and lies…

Alfie Hope’s life is perfect. Managing Darley Hall for an employer who hasn’t visited the house in five years. It’s more than a job, it’s his home, a safe haven for him and the staff he considers family. That is, until their master passes away and a new master inherits. A new master who wants to live in the house.

Jolyon Mortimer Devereaux was stunned when he inherited Darley Hall. It offered an escape from his life, his lover, and his awful family. He arrives to find an estate manager who is outrageously handsome in a gentle, yet rugged way, but someone who clearly has never been a servant in his life!

Alfie and Jo grow tentatively closer. That is until a shock Christmas arrival blows everything wide apart, leaving Alfie and Jo struggling to hold on to their love. It will take a Christmas miracle to hold them together.

A Taste of Ink Series by Daniel May

Only two men were allowed to touch Trinket — his possessive boyfriend, and the dangerously charming tattoo artist hired to put that boyfriend’s artwork under his skin.

Part love triangle, part odyssey of kinky self discovery, the Taste of Ink series is a rollercoaster of psychological smut with cheating at its core.

‘I don’t usually enjoy books about cheating but this book hooked me in from the very beginning and I could not put it down. It’s one of the hottest books I’ve ever read.;

‘I devoured this so quickly and ferociously that I’m still dizzy from it.’

The Taste of Ink series is kinky contemporary erotica, ongoing with 6 out of 7 books released. The first 3 books are currently discounted at 99 cents apiece.

To the North of his Pole by KC Carmine

A short story of Santa and his elf full of STEAM and Christmas puns!

He doesn’t call him Daddy. He simply calls him Santa.

It’s a week before Christmas and Santa, swamped with lots of responsibilities, needs a break. Thankfully, his elf, Perty, comes to the rescue.

For owner and Front of House manager, Ben Carter, December only means one thing: stress. But when a rugby injury forces him to ask for help from a very handsome Welshman, Ben may find himself subject to a little Christmas magic.

When Elliot’s left without a job or a plan for what should come next, he thinks the universe might be trying to tell him something. Luckily, his best friend’s father is right there with advice and whipped cream-topped pancakes to make everything better. But what James can’t help with are Elliot’s feelings and the way he longs to be more than friends with the tender man—the man who Elliot knows would make the perfect Daddy.

My standard issued lab badge reads “Simon”, but it really should say “unexciting nerd with no social life”. Don’t get me wrong – I love what I do with a passion, but it doesn’t leave a lot of time for much else. Especially romance.

While chipping away at my work, I’m suddenly the person between hired cartel muscle and the fossil that will define my career. Which isn’t the most insane part of the story.

My savior is a chaotic, bat-wielding punk with a bubble-gum pink mohawk and a killer smile.

In a mad dash to escape the thieves, my knight in studded armor sweeps me across the country while hitting every tourist trap along the way. While smuggling a fossil, might I add.

Oh, and did I mention this pink punk can shift into a dinosaur?

An irresistible client. A carnal arrangement. What if he doesn’t want it to end?

Damien Lambert has been working at trendy Café Seuil in Portland, Oregon, for several years to pay off some old debt. By day, he helps manage the café’s daily operations along with his handsome coworkers. By night, well… let’s just say that there’s more than coffee on the menu.

On the floor above the café, mysterious, magic doors open to hosting rooms where the café’s employees take clients and satisfy their darkest desires. When Damien has finally paid off all of the debt from his past, he’s looking for a fresh start. But there’s one client left that he just can’t seem to say no to.…

The Problem Client is the first book in a steamy M/M paranormal romance series with shifters, a little bit of magic, and a lot of spice.

SERIES NEW TO KU: $ 4.99 EACH on Amazon and available with KU

We’re worlds apart. Is there anything binding us together beyond pure lust?

Bo Ayers is Romani through and through. Travelling is in his blood, and his job requires time away from home, but he misses his family and friends in Podlington when he’s on the road.

Big-city businessman, Saman Shah isn’t sure how he ended up in the quaint Somerset village, but he is happy to hang around for a day or two. Unexpectedly, opportunity knocks, and it’s not just about investments and profits.

As Sam gets to know Bo and his family and friends, all his prejudices are challenged, and it isn’t long before both men are offered opportunities to change their lives…together. The only question is, will they take it?

A low-angst, feel-good LGBTQ+ Opposites Attract story can be read as a standalone or as part of the Podlington series.

Be careful what you bet on…

Betting is all fun and games until you have to pay up when you lose. Within these three short stories we follow the ones who were on the losing end of a bet. The price they paid? They have to wear a pink Lolita dress.

Luckily for them, sometimes paying up comes with the best benefits.

* After receiving a shock from his late aunt’s past, Jake makes a bet with his devious lover and the loser pays penance.

* Michael Gentry lost a bet and decides to make the best of the situation with a little bit of seduction.

* Travis has a problem. But will his gambling win him a chance at finding true love or cost him everything?

Piotr “Snake” Lewin has had it with his job as one of Aphrodite’s cupids.

He’s sick of all the true love rubbish, and if he has to watch one more couple fall in love, heads are going to roll. Probably literally. The final straw is the announcement that the cupids will be helping out Father Christmas in the run up to the most materialistic day of the year. One overcommercialised holiday a year is more than enough, thanks.

That’s it. Piotr quits. Now, he just has to survive the one month notice period at ‘The North Pole’, and the cute elf who’s determined to be friends…

Blood Sports: An MM Mafia Romance (The Hanged Men Book 1) by Daniel May

Jove Alms, a brutal mob kingpin who passed his crime empire onto his sons, is called out of retirement by signs of a rat in the organization.

There is only one person who can identify the traitor: Tobias Nimh, a young stablehand with doe eyes and no clue what he’s stumbled into.

Blood Sports is a dark MM mafia thriller containing an age difference romance. Written as the first in the Hanged Men series, it can be read as a standalone. 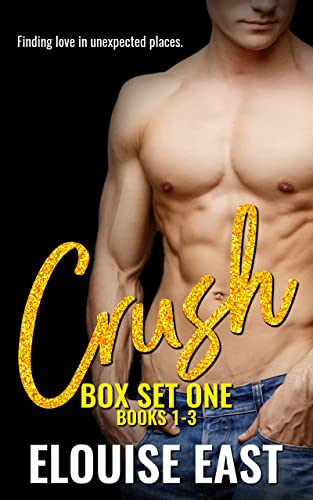