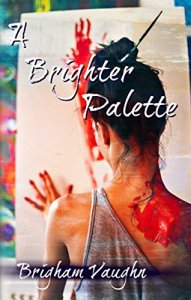 A Brighter Palette by Brigham Vaughn

Annie Slocum is a bisexual woman struggling to make a living as a freelance writer. Stuck in a rut, she feels bored with her career, her relationships—her life. A chance meeting with Siobhán at a gallery adds a bright spark to her dull life.

Siobhán Murray is a lesbian Irish painter living in Boston. She loves her career, loves her life, but she’s missing the one piece that will make her life complete—a partner. She falls hard for Annie and is delighted to realize Annie inspires her work. But a string of failed relationships has left her wary of bisexual women and wondering if she can trust that Annie won’t leave her.

When Siobhán’s past comes back to haunt them, they’ll have to decide if the new relationship is something that will burn bright and end quickly or if it’s meant to last. 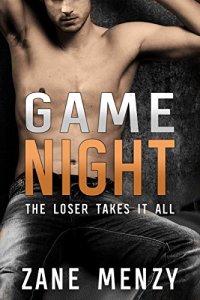 Small town Kiwi lad Callum Bradshaw is terrified of stepping outside of his comfort zone and taking risks. He is struggling to move on with life after his fiancé Misty abruptly ended their engagement, breaking his heart and bank balance in one go. Meanwhile, he is left with the stress of running his fledgling café business and is haunted every night by a nightmare poisoning his dreams.

An energising remedy in his life though, is his friendship with cocky womanizer Garrick Masters. Every Thursday Garrick holds game night at his swanky apartment where the two men gamble and booze it up. One evening things take a sexy detour when Callum loses a bet and has to clean Garrick’s apartment… naked.

An entirely unexpected passion explodes between the two friends and leaves Callum questioning his sexuality and aching heart. Callum soon realises that if he wants to explore these forbidden feelings then he must tackle his biggest fear… taking a risk.

Game Night is a 60,000 word erotically-charged tale with a HFN ending. It is sexy, heartfelt and most definitely filthy. It is the opening chapter of a new steamy romantic adventure but can be read as a standalone. It is loaded with hot d/s action where characters do not always make the wisest decisions. Please avoid if you do not enjoy these things.

Book seven in the Kiss of Leather series

As the men at Kiss of Leather celebrate the resolution of the case of Corey’s kidnappers, Master Hunter worries that he’ll never see Tobey again.

Chuck isn’t about to let one of the key figures behind Corey’s kidnapping get away from him again. Everything he and Stone have discovered through their months-long investigation is about to come together. However, when Chuck follows the suspect to a shipyard, it’s not only his own life that’s in danger.

Master Hunter is officially part-owner of Kiss of Leather, so he’s thrilled to raise a toast in celebration now that the mystery of Corey’s kidnapping has been solved. However, he can’t help but feel left out. Everyone is paired up except for him. He’s never believed in monogamy before, but after Tobey unexpectedly left Kiss of Leather and no one knows where he’s gone, did Hunter make a horrible mistake by not sharing his true feelings?

Tobey has been miserable ever since leaving West Hollywood and going back to Idaho. After breaking his own promise to himself by falling in love with his trainer, Tobey impulsively left Kiss of Leather because of something awful Master Hunter said. But things at home are worse than ever and he’s come to realize that those who are related to him by blood aren’t necessarily his true family. The only place he’s ever felt he truly belonged was at Kiss of Leather.

Tobey has to face Hunter if he goes back to Kiss of Leather and Hunter has to figure out what he really wants from life and love. It takes a charity slave auction to show them what they’ve both been too stubborn to see. 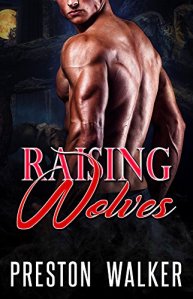 The fight for love.
The battle for family.

Single, human father of a three-year-old werewolf, Jordan Hacker is in over his head. Determined to protect his daughter Darla, he searches for a way to get her out of the city to keep her safe. But before he can do so, Darla shifts, exposing her secret in front of a stranger.

Outreach leader, Jeffrey has been searching for the little girl shifter–as she is heir to the Alpha Prime. Her sexy and sensitive father has no idea of her heritage. But when Darla bites her father, turning him, it’s up to Jeffrey to protect them all. The heat between Jordan and Jeffrey ignites as the two are forced to work together and trust each other. When their undeniable passion erupts, there’s no turning back. Now, they must find a way to protect Darla and her rights to the throne before it’s too late. Can they find true love while raising wolves together?

In this 75,000 word gay wolf shifter mpreg romance novel, two men fight a mutual enemy while fighting for the true love they’ve always wanted. With steamy scenes and ruggedly hot men, this novel takes you on a journey of pleasure and passion. But when one man discovers he’s pregnant, will he fight for the family his enemy is hellbent on destroying?