Leadership and setting an upstanding example are everything to Wisconsin Wendigos captain David Dickson. On ice, he’s got it all together. Off ice? Not so much. For years he’s been pining for not one, but both of the loyal alternate captains who’ve stood by him through thick and thin.

They’ve always had his back…

Sasha Ivanov and Bo McAllister have always seemed more into each other then into their captain. But when the stress of the season starts affecting David, they’re more than willing to step up and help him deal with it–by whatever means necessary.

When Sasha and Bo offer him everything he’s been wanting, David can’t say no, even though he knows it comes with an expiration date. But the more he finds himself fitting into their life, the more he wants what he knows he can’t have.

Can Bo and Sasha find room in their hearts for one more person? Will David let them bring him into their life? Or are these captains doomed to remain just teammates?

Find out in this steamy sports romance novel, featuring a team captain who’s too stubborn for his own good, a defenceman with a heart of gold, and a goalie who never has a problem using his words.

Three-Man Advantage is a standalone romance with a HEA and no cliffhanger! Also includes a sneak peek at Holding, Book 3 in the Tripping series, coming in October 2018!!! 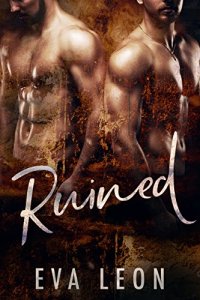 Good Omegas love their masters.
Taavi has never been particularly good.
“Dark desires mean the games I play in the bedroom have to be hidden from prying eyes.”

I’m not going to repeat the same mistake twice. The next toy I buy will be perfect. And Taavi really is all that, and more – except he has a smart mouth, and I have a short temper.
He better not start digging around my past, or he might find himself with no future.

“I didn’t choose this life. But I never thought I could fall in love with the Alpha who bought my body.”

I can’t help my natural curiosity. Will is intriguing, and I have to uncover all his secrets. With each thread he pulls, he unravels another one of my inhibitions.
But I want to play, too. I want to know his deepest, darkest thoughts… Even though they could mean my demise.
This book features dark romance themes. You have been warned. 😉 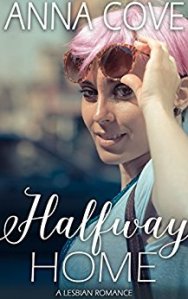 Love lurks in the strangest places.

Savannah Burns doesn’t have time for new love. She’s too busy saving the world, lobbying around-the-clock for landmark environmental legislation. Sleep? Who needs it? But when a pink-haired roller skating chick crashes into her in a restroom, she knocks something loose in Savannah.

That’s the only excuse Sav can find for kissing the woman, anyway. And kissing her again. And insisting on inserting herself into the skater’s life.

After years of being shoveled from foster home to foster home, Casey Day no longer takes direction from anyone. Especially not the pushy lobbyist who has decided to take her on as a project. Casey is skating all fifty-two states and D.C. for charity and she’s doing it her own way. The thing is… even she has to admit Savannah always seems right.

On the outside, they couldn’t be more different. Savannah is a southern woman with a hardened political edge and Casey is a joyful California free-spirit. But they come to find they actually have more in common than just their initial attraction to one another.

For the first time in her life, Casey wants to stay rather than run. But could their secrets destroy their chance at love?
Find out in this big-hearted love story of two women who enter one another’s lives like cyclones and change their fates forever.

Halfway Home is part of a series of loosely connected standalone novels featuring a group of friends. Start (or continue) this series of sweet and sexy romances today. 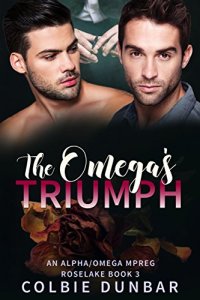 The Omega’s Triumph by Colbie Dunbar

Against their will, Liam, Jake and their daughter, Maisy have been sent to The Old Country—Jake’s birthplace—by Thorn, the omega’s vindictive former boss.

And there’s only one word to describe their new home: gray. Everything blends together as though the color has run in the wash.

Liam is desperate to save his family but he and the baby are confined to their room, and he watches life pass by from a third-floor window.

Jake works each night and rarely sees Liam and Maisy. But as Thorn’s requests become more outlandish, the omega tries to appease him and prevent the alpha finding out the truth.

And there’s Nora, the beta who cleans the club and pops up in unexpected places. Is she Thorn’s spy? Or Jake and Liam’s ally?

The ever-present cigar smoke, gold rings and amber fragrance provide a backdrop for their lives as the alpha and omega struggle to save their relationship while they battle greed, humiliation, guilt and exhaustion.

But when hope finally arrives, it’s ushered in with a rose.

This is a 23,000-word, non-shifter, mpreg novella with an HEA. It’s the final book in the Roselake series.

Boston firefighters Matt Lopez and Eugene “Johnny” Johnson have been best friends for longer than either can remember. The kind of friends who can finish each other’s sentences, who always have each other’s backs, who fit together like hand-and-glove, who don’t keep secrets from each other…

Well, maybe just one, but how is a guy supposed to admit he’s into other guys when his best friend is homophobic? Besides, it’s easy for Johnny to keep that particular secret from Matt when girls are just as much of a turn-on as his best friend is.

Especially one girl in particular.

Eden Evans. She really doesn’t expect to live past her twenty-fifth birthday—not that she can admit that to anyone, since she knows darn well the reason sounds crazy—but still, burning her house down isn’t the way she expected to go.

Good thing Boston’s finest were there to buy her a little more time… her and her book.

One hundred things Eden’s determined to do before she dies.

With three months left and just three things still to check off, she just might make it, too. Especially when the hot firefighters who saved her bucket list from burning offer to help.

They also offer her a place to stay while she figures out what to do next… and living with two men who heat her up in all sorts of unexpected ways when she’s got nothing left to lose? It brings out a side of Eden that she didn’t know she had.

Suddenly, accepting the hand fate seems determined to deal her is the last thing she wants to do…

THREE is a 112,000 word steamy, standalone MMF bisexual ménage romance with no cliffhangers, some heated discussions about camels, even more heat in the kitchen, and three people who find a way to make love work, even when the odds are stacked against them. It’s intended for readers who enjoy explicit scenes of MF, MM, and MMF on the way to the kind of HEA that combines sweet with heat… and doesn’t let up until everybody is fully satisfied.