When Caleb Chance walked out in Detroit five years ago, leaving his band, millions of his fans and his lover behind, Leo knew he could never forgive.

Some things, no matter what the cause, are unforgivable.

But Leo never expected Caleb to show up again, clean and sober and wanting to get their band, Star Shadow, back together. He definitely never expected to agree to Caleb’s plan.

He never expected to confront the love of his life again—or the disaster of his past, the hopelessness of his future, and every terrible thing he’s been carrying inside him.

But maybe some things aren’t so terrible after all. 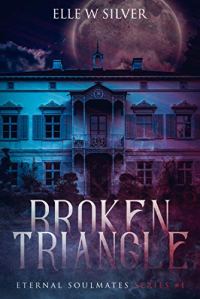 Will their love for one another be enough?

Life has just started to look up for Jamie. He has a job at the Moore Manor. He is finally free of his abusive uncle. He has a friend who genuinely cares for him. But when the attentions of the Hotel owner’s son begin to threaten his newfound peace, Jamie worries.

Riley doesn’t appreciate being summoned to Moore Manor. But while at home, he meets the most beautiful young man he’s ever seen. He wants to court the younger man, but his mother complicates his intention with a shocking revelation. Not to mention the Vampire he can’t seem to stop fantasizing about.

Ben’s been sent to find a nuisance witch. He needs to put all thoughts of a destined soul mate out of his head and focus on the task ahead. But when he realizes that the witch is more powerful than he originally thought, his priorities shift. He must now protect the two men with everything he has, even if one of them wants nothing to do with him.

Can Jamie, Riley, and Ben navigate their complicated lives, the threat of a wicked witch with a grudge and their forbidden love for one another?

Broken Triangle is the first installment in the Eternal Soulmates Series, a sexy saga of stories about vampires, witches, werewolves, and humans. If you love your stories steamy, action-packed and emotional, then you’ll love Elle W Silver’s first book.

Where There’s Smoke by BLMorticia

Santiago escapes to a small town where he falls for Jonas, but Santiago’s desire for Myles causes disruption in their happy home.

Although a horrific incident nearly destroyed me, I’ve found everything I needed… Or… almosteverything. Better days are ahead for me and Jonas. Despite pure bliss, something is still missing.

Being an openly gay firefighter is tough, but with Santiago at my side, all the struggles are worthwhile. The American dream of the white picket fence awaits us. First, I must clear the path to our future, by digging through the wreckage of his past.

Heartbreak is my calling card. Nevertheless, I’m determined to marry my othertrue love. Chaos stole him away from me, but no matter who or what stands in my way, I will get him back.

Santiago longs for a long-term commitment, filled with children. While Jonas and Myles battle for Santiago’s love, will his ultimate fantasy end up damaging any chance he has at true happiness?

This angsty, 100,000-word novel includes fist fighting, flashbacks and mentions of rape, on page violence, and death. Despite it all, there’s an HEA with the cutest baby on the planet.

Note: This book has been previously published. Only newly edited with no additional material added.

Boys with Toys by Sky McCoy

No one is who they appear to be.
Maxwell Gold appeared to be a successful straight man with a wife and loads of friends, but Max had been living a secret life. Everyone knows about it, his wife, and his boys, the only one who doesn’t realize that he’s not straight, is Maxwell Gold.
The night he walks into a French restaurant and is love-sick over a young man, is the same night he’s confronted with the truth about himself, and his sham marriage to his beautiful wife. Can the love of his life Jami Caulfield who knows who he is, convince Max that love is never having to say you’re sorry when you accept yourself, and who you choose to love?
Can Maxwell Gold handle all the problems that have been tossed at him when he announces to his father that he’s gay and loves a man?