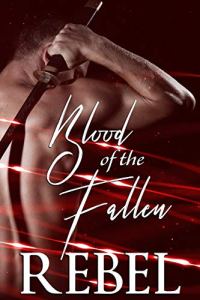 Who decided to put a fallen angel and a gay vampire in charge of saving humanity?

The concept of Armageddon has been thrown at vampire turned international arms dealer, Drake Brokk, his entire life. But he never expected to find himself in the middle of it.

When Elijah Abrams, a fallen angel disguised as an FBI agent, tells him that the ultimate battle between good and evil is threatening to explode, Drake has a hard time accepting it. He certainly can’t believe it’s up to him to stop it.

Armed with only an ancient sword, a kleptomaniac elf and his rapidly unraveling wits, Drake can’t help doubting his ability to save the world. And he knows for sure there’s no weapon forged that could keep him from falling for the angel that’s charged with helping him. 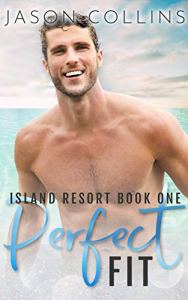 His reputation says straight, but his hands say something else.

Being a personal trainer for the wealthy, handsome Brooks isn’t quite what I’d expected. He has a hands-on approach to fitness that I thoroughly appreciate. Brooks is on a high-protein diet, and he’s ordering me for room service. Luckily, I know all the private spots on this gorgeous island.

Except I’m up to my neck in bawdy adult actors, and they just keep coming. My brothers and I want to buy land for our resort, but we’re up against a clothing-optional film studio, a wine-toting lesbian, and a sweet old lady with a taste for adult actors. Everyone’s vying for the same piece of property, but with Brooks spotting me, there’s no weight too heavy.

We’re in paradise, and Brooks is my temptation.

He’s the limber one, but I’m feeling more hetero-flexible.

I’m at the best fitness resort in the Caribbean, seeking exercise and focus. But most of all, I need to lie low from a scandal I didn’t earn. Getting my mind and body in order is my goal, and training with Nate is a great way to keep my head down—if only my head would stay down.

Not even the outlandish gay adult studio next door can tear my eyes off Nate. The island sun is blazing, but he’s the reason I’m hot. Between the Pilates poses and intense cardio sessions, I can hardly focus on setting the record straight. But he needs help negotiating a deal, which means we’re both on the table.

I’m trying new things, and Nate has the VIP package.

Note to readers: This is a spicy, funny standalone MM romance, heat level 10. Readers can expect several steamy scenes that will leave you gasping. 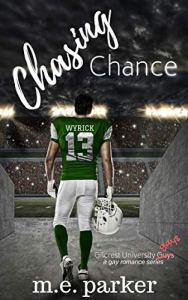 There are moments in your life that become part of you. They become so ingrained in your memory that you can’t let them go, no matter how hard you try. Some may seem small and insignificant when they happen. Others are so big and important that you know, even while you’re in the moment, that your life will be forever changed. For me, almost all those moments—both the small and insignificant as well as the big and important—were moments I shared with Chance Wyrick.
If I were in a support group for hopelessly pathetic gays, I’d have to introduce myself by saying, “Hi, I’m Andy Michaelson and I can’t stop myself from thinking about Chance Wyrick.”
From the time we met, when we were only six years old, and for the next twelve years, he was my best friend. I fell in love with him along the way. I couldn’t say exactly when it happened, only that it happened.
Words of advice:
Never fall in love with your best friend, especially if he’s one of the most popular kids at school, the best high school quarterback in the state, or if he happens to be your next-door neighbor.
But most of all…
Never, I repeat never, fall in love with your best friend if he’s straight. Nothing good can come of it. Trust me.
Our friendship was over before we finished our last year of high school. My best friend became my ex-best friend. I hoped to forget about him when I went off to college. But Chance followed me there. So did all the memories.
I tried to forget him. I did. But he was more beautiful than ever. He was the starting quarterback for Gilcrest University. He was larger than life. He was impossible to ignore. We hadn’t spoken in years, but the memories still hit me out of nowhere, and they still hurt.
By the time I started my third year at Gilcrest, I was beginning to think I’d never be over him.
As it turns out, I was right…
Chasing Chance is the first book in the Gilcrest University Guys series. It’s a full-length, “friends to lovers” romance novel. It has “coming out” and “first-time gay” themes, is stocked full of STEAM, heartache, and laughter, and it has a guaranteed happy ending. The series will follow the love stories of four college friends. Chasing Chance is the first of two books that will tell Andy and Chance’s love story. 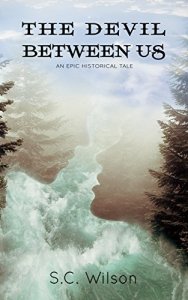 The Devil Between Us by S.C. Wilson

Jessica Pratt is only ten when her world is destroyed. After witnessing unspeakable acts of violence, she flees for her life, becoming lost in the untamed California wilderness. Terrified and alone, she fights for survival as each step takes her further away from everything she has ever known.

For nearly a decade Jessica calls the mountain home until tragedy strikes once again. Forced to reenter a world that is controlled by men, Jessica transforms into Jesse for her own protection. Posing as a man, she ventures off the mountain for the first time in years, and soon finds herself at the mercy of emotions beyond her control when she attracts the attention of a local singer.

Will Jesse be able to maintain the ruse she has created or will she let down her guard and confess her true identity to an unlikely new love? And, what happens when she comes face to face with the demons from her past? Will she get the justice she desires? 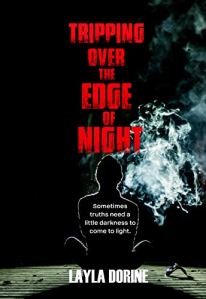 Tripping Over the Edge of Night by Layla Dorine

Going home had never felt so wrong.
When Derrick received the phone call informing him of his mother’s death, it felt like the bottom had dropped out of his entire world. Gone was every hope and ideal he’d left home with, replaced with the bitter realization that he’d run out of time, run out of plans, and was desperately close to running out of give-a-damn.
It doesn’t help to come face to face with his older brother, Ray, who’d spent much of his childhood either ignoring him, ditching him, or complaining about his very existence. It’s enough to send him right back on the road again, or at least, it would have been, were it not for a house, a cat named Slash, and Mason, his best friend-with-benefits, now the head librarian in town and hot as sin.
It was hard enough leaving Mace in the first place, but a second time? He didn’t think he had it in him to be so heartless. Twelve years ago he’d slipped away under the cover of darkness, without even a single goodbye. Now, standing on the edge of night, looking down at the tiny town he’d fled, Derrick is left with one burning question:
Can the door to the past ever be closed enough to allow space for the future? 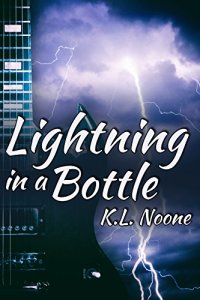 Lightning in a Bottle by K.L. Moone

Adam Johnson’s the heart, soul, and songwriter behind his band’s greatest hits … if the term can be applied when they aren’t even famous yet. He’s never been a good front man or stage presence, though; he leaves that to Lee, who sings Adam’s words as if they’re poetry.

The problem is, they are. Every word Adam’s written is a love letter for his lead singer, though he’s never had the courage to say so.

But when a famous — or infamous — legendary rock star and scandalous sex demon drop by one of their shows, Adam’s forced to confront the possibility he just might get everything he wants — the record deal and Lee’s heart — if he can only find the words to ask. 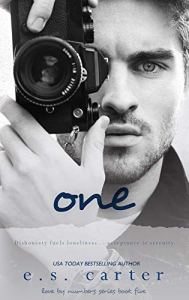 One (Love by Numbers Book 5) by ES Carter

One click.
One perfect frame.
That’s all it takes to capture an eternal moment; although most people let them pass by without acknowledgement.
I don’t waste any.
Not a single one.
If I see something of beauty, I want to experience it, feel it and immortalise it.
If I see someone of beauty, I want to taste them, worship them and memorise them.
I don’t have a type, if I like you, I like you.
I don’t have a preference.
My bisexuality is a gift, not a defect.
It’s the freedom to see beyond gender.
One blink.
One touch.
One night.
Life is filled with so many ones.
One chance to get things right.
One life to live as you choose.
One decision that gives you acceptance.
One person to fill the emptiness.
Just one?
Nah, like I said, life is full of ones.
My camera lets me focus on the good times; I develop from life’s negatives, and if things don’t work out, I just take another shot.
Who needs just one?

Book #5 in the ‘Love by Numbers’ series.
Can be read as a standalone. 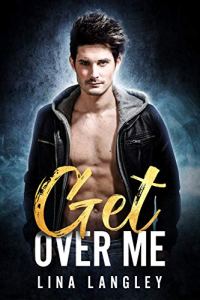 Get Over Me by Lina Langley

Special Agent Rocky Knight has spent half his career keeping Sean Connor out of trouble. The president’s son is nothing short of irresponsible, reckless, and completely out of control–but when Sean’s sent home in disgrace after practically flunking out of school, the last thing Rocky wants is to witness his fall from grace.

Especially when Sean isn’t the little boy he remembers.

The mischievous wild child has been replaced by a funny, ambitious, sensitive man. One who’s stunningly gorgeous. One whose soft, kissable lips draw Rocky’s gaze every time he speaks. One who’s far too young. One who wants Rocky all to himself.

And one who’s completely off limits, if Rocky wants to keep his job and any sense of self-respect.

But no matter how much Rocky tries to distance himself, every alluring glance and enticing laugh draws him deeper and deeper under the younger man’s spell. Can Rocky keep things professional between himself and Sean, when Sean grows more determined every day–and the more he falls, the more Rocky knows he’ll never be able to get over him? 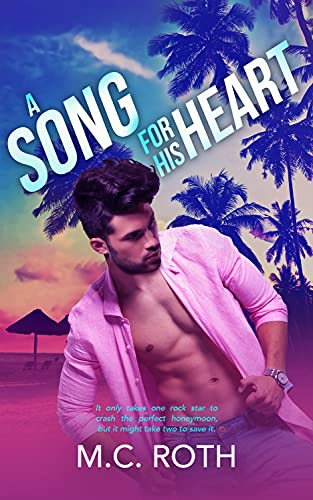